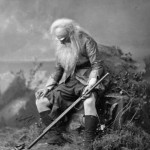 Rip Van Winkle, who never existed, was a monumental underachiever. Per Washington Irving’s tale from 1819,  he sat around, hated his wife, named a dog Wolf, and just said “screw it” and slept in the Catskills till everyone he knew was dead, including the dog. End of story.

But he knew how to pick a hideaway.

Recently I drove up the curving Hwy 23A from Palenville, New York — a road built by convicts 99 years ago — hiked up the trail from North/South Lake in Catskills Park, crossing a frozen lake, passing stone-carved signatures from 19th-century tourists on ledges

and into woods with upside down icicles and no one around.

And there, with help of a sandwich, my anger of Rip ebbed. ‘Rip’s Rock,’ lying near Newman’s Ledge, looks over a full sweep of the Hudson River Valley — I think it must be the most beautiful place of the Eastern Time Zone.

I really don’t know why anyone goes to the Hamptons.