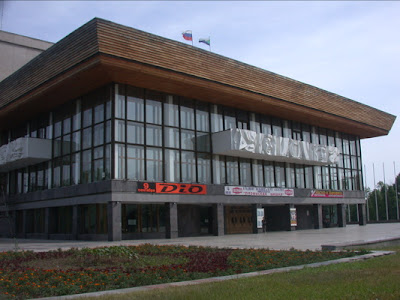 SIBERIAN INTERVIEW, 2005
During my first crossing of Siberia, in 2005, I was smitten by the kindness of Russians on trains, the beauty of Lake Baikal and Kamchatka and — even more so — the flood of ‘Dio’ posters plastered on street signs in places like Vladivostok and Petropavlovsk. It left me to wonder, maybe heavy metal didn’t die when Kurt Cobain donned his flannel — maybe it just moved to Eastern Europe?

Turns out, Ronnie James Dio — who died Sunday from cancer — was beginning his 2005 tour in, of all places, Khabarovsk’s Theater of Musical Comedy (above), a five-plus day train ride east of Moscow. I was blogging about my trip for Lonely Planet and just had to ask about this, and talk with the man who invented the heavy-metal ‘devil horns’ salute about travel in general.

After relentless efforts, he agreed.

In tribute to Dio, here’s his take on travel, grunge and that famous salute, from my interview in 2005.

RR: How do Russians ‘rock’ in comparison with fans in other countries — say Belgium or Canada?

DIO: Russian rock fans are like good rock fans everywhere. They’re loyal, knowledgeable, and they live for the music. We found them to be great in every way.

RR: Do you travel much?

DIO: I travel enough while touring so I don’t need anymore. Home is a very welcome sight.

RR: If you got a couple tickets and a week or two to go anywhere you haven’t been, where would you go?

DIO: I’d go where ever they don’t have phones, so I guess it would be some where in the wilderness, if there’s any left.

[Note: The Far East of Russia is a very good place to look for it.]

RR: Some might say that 1991 was a bad year for communism and heavy metal. The USSR collapsed, and Nirvana brought on a decade of grunge and flannel shirts. Is the 1990s something the heavy-metal world would like to forget?

DIO: I think if you forget about the bad things in your past you can never correct them, because music and life travel in cycles and it just wasn’t our time any more. A new generation of fans wanted their music, and not their brother’s or sister’s songs or bands, so they embraced Grunge because they could make what they heard and liked their own. Luckily metal never went away and now enjoys somewhat of a renaissance.

DIO: Metal in 2005 is thriving, as judged by the huge turnouts at festivals, and can actually be heard on the radio again. It looks good.

DIO: I guess it means our drummer Simon, is going to rehearse his stand up comedy act in Khabarovsk, but the band will still play the show!

RR: I listened to some of your first and last solo albums recently and am impressed at how much you’ve stayed with the same type of music (ie no duets with Phil Collins) — dark, hard, fast, titles like ‘Dream Evil,’ ‘Evilution’ and ‘God Hates Heavy Metal.’ Why so dark all the time?

DIO: Dark themes are generally about things we can never see, so you must use your imagination. After all, who has ever seen a dragon. They are also a great match to the heavy, almost always minor keys that we write around, and who wants to talk about love and relationships when you have these dark vehicles to use.

RR: What’s the most surprising CD in your collection?

RR: One of your more recent albums is ‘Killing the Dragon.’ Is the dragon anyone we know?

DIO: The dragon represents bad government, brutal rulers, and technology. Bad governments and harsh rulers speak for themselves, and if we let technology get out of control, we may end up controlled by it.

RR: Many of your photos shows you giving ‘the sign’ — pinky and forefringer raised, middle fingers curled under your thumb. Is that really a ‘devil sign’ or what?

DIO: The “sign” is a superstitious symbol used by many older cultures. It’s meant to intercept the evil-eye and other curses, and what better place to use it than at a metal show?

–> If you haven’t heard Ronnie, ‘Rainbow in the Dark’ from Holy Diver (1983) is a famed solo single. ‘Man on the Silver Mountain’ from Rainbow’s first album (1975) is another enduring song.

One Response to Tribute: Ronnie James Dio on Travel