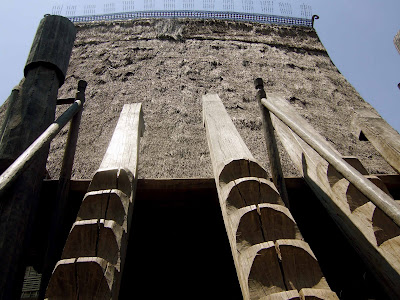 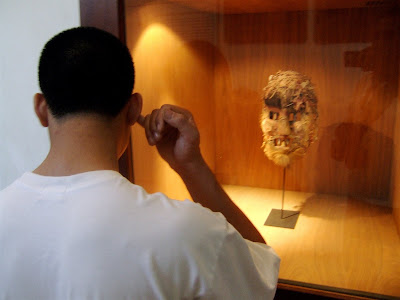 Hanoi’s Ethnology Museum — an awkward 15- or 20-minute drive west of the center — is likely Vietnam’s best museum and all visitors to the capital city should set aside a few hours to see it. In the two-floor white building are exhibits and videos that tell the tale of Vietnam’s ethnicities, starting with the Viet (Kinh) — or ‘Vietnamese’ — who make up 86% or so of the population.

I went yesterday with Giap, a 25-year-old guy at my $12 hotel who volunteered to take me. He waved a ‘no’ to the ticket counter and didn’t pay, and ‘became one’ with many of the exhibits. A couple German tourists sat on tiny bamboo stools watching a video on the tradition of non la (conical hats) as made in Chuong village, about 50km south of the capital. Giap — who’s from that area — stepped onto the exhibit, which had various stages of the hat-making on exhibit and various tools used — and picked up a triangular iron device and long, flatted pieces of bamboo ‘paper.’ He started moving the device over the bamboo. ‘Make non la like this,’ he said, or something. A minute later the video showed the same. The Germans, and myself, were impressed.

A country bumpkin in the city for a couple years, Giap — who works every day at the hotel, and is in Hanoi to ‘study automobiles’ (to be a mechanic I think) — may stand out a bit in some parts of ritzy Hanoi, but he was at ease in the museum. In another exhibit, he picked up rocks and hit them against a bronze gong to simulate the sounds he listened to growing up in the countryside. As we walked past mannequins with various ethic garbs on, he’d point and ID them immediately: Tay, Hmong, Giao. He knew most, if not all. At one point he sat in front of a buffalo sacrifice video engrossed.

Outside there are many rebuilt traditional structures lining a nicely manicured garden. The most irresistible is the tallest — a Bahnar communal house, built in the fashion of a hundred-year-old, all-bamboo one from near Kontum in central Vietnam. Nearby stood a longhouse. We hopped up and sat for tea and cookies left for visitors. Giap rinsed the cups out with tea, and poured it out in a nearby ‘stove area’ before we drank.

At a nearby cafe, Giap — who shares his name with North Vietnam’s greatest 20th-century general — cooed to birds in a cage effectively and flirted with two Vietnamese women as we had something cold to drink.

He speaks maybe three words of English, but it’s hard to imagine a better ‘guide.’

Through August, the museum has a FASCINATING exhibit dedicated to the ‘subsidized economy’ period from 1975 to 1986, when locals lined up with food stamps to get rice and supplies. ‘Very bad,’ Giap said with a frown, not that he personally remembers it. The exhibit shows ‘dream’ items — like a stove brought back from someone visiting the USSR, or plastic sandals called Tien Phong which one woman sold to pay for a flight home to Hanoi from Hue. Videos and photos tell the tale of the hardship. One person said, ‘Our greatest dream was to have enough food and clothes.’

Things have changed. For one thing, in 21st-century Vietnam you can have a rather anti-communist exhibit like this in plain view of Hanoi’s authorities.