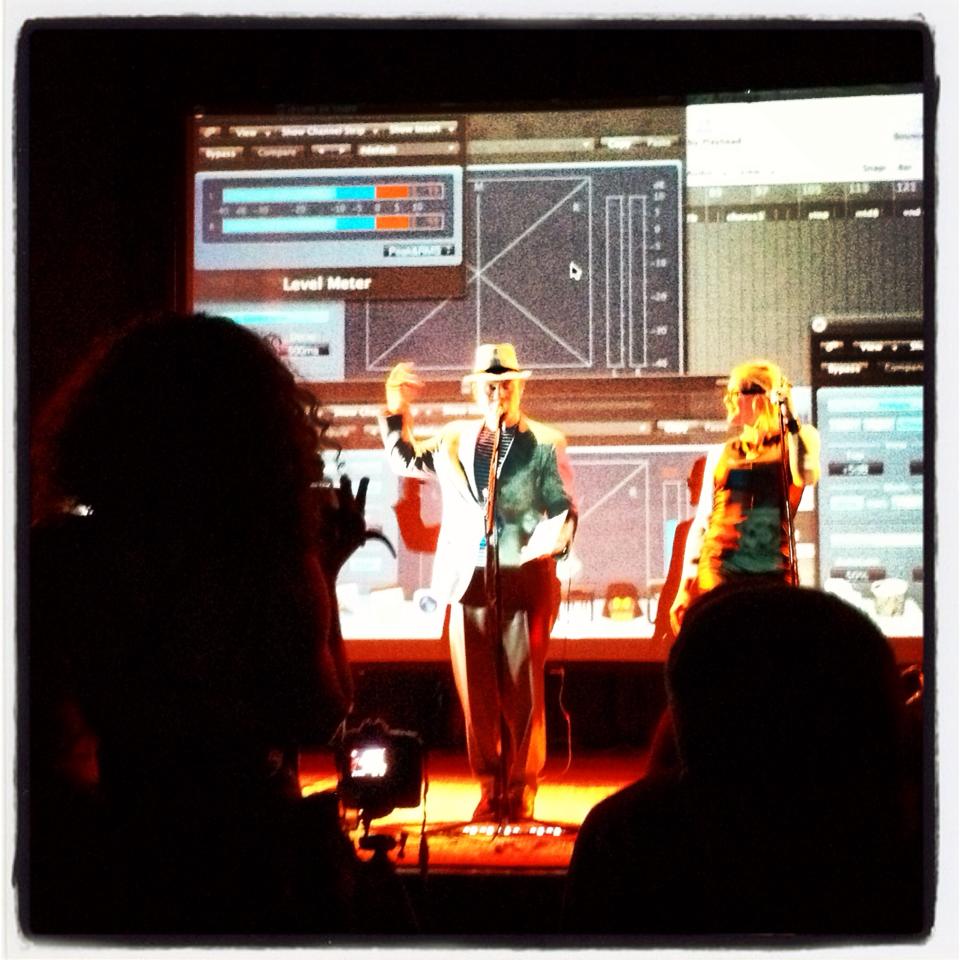 In 1993, I sent Thomas Dolby a prank fax. The timing was too tempting. Thomas Dalby, aka Chip, was working at the Guggenheim Soho in NYC and Dolby was some sort of “artist-in-residence” for a few days, occupying a nearby cubicle. So I faxed some over-the-top adoration, delivered by Thomas Dalby to Thomas Dolby. Should have been on “Punked.”

Last night I saw Dolby in Portland. I’m not really a fan, but I learned a lot. First of all, Dolby’s bald. 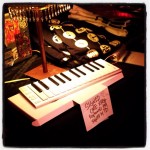 He wore a Russian-style navy shirt (small horizontal blue stripes) under a vertically striped gray suit jacket. And the hat that the guy has on Devo’s “Are We Not Men?” album cover. His merch table included a signed keyboard, delicately lit by the most tasteful of lamps.

He started a two-and-a-half-hour show with an interesting 41-minute film/performance on the “Invisible Lighthouse” (why I went; I’m interested in how nostalgia mingles with “travel”). Mixing video, voice-over, a sound effects guy, and song fragments, Dolby told the tale of the last days of a lighthouse on the disappearing English coast where he grew up. Then segwayed (sic, on purpose) into two talkshow-style interviews with a funny local cabaret singer Storm Large and a local belly dancer pioneer Rachel Brice, before finishing with six songs. Yes, he played “She Blinded Me With Science” (the cabaret singer mocking him at one point, “OK, let’s go science guy”).

During the talkshow segment, Storm said of Dolby’s performance, “The film was so beautiful because you go back home like a commando to rescue your childhood memories” of that lighthouse. Pretty good summary.

The best though was the Biggest Thomas Dolby Fan of All Time. He’s 52. He buys the concert shirt, disappears into the bathroom to change, tucks it in, and sits in second row to the side — the “VIP section,” which is $60 compared to $20. Only 200 seats. I arrive 20 minutes before the doors open and have fifth row, directly across the aisle from $60 seats. The Fan, though, dances in a fidgety way, like a guy with a bad back trying to get out of a huge bean bag chair. He sings along to songs no one remembers from Dolby’s post-“Science” career. At times he leans his head back, eyes closed, and sings along to the words of “Airhead.” He means it.