The Lou Reed of Travel

In a recent article in the wonderful This Land Press, Nathan Brown begins a defense for the need of 21st-century poetry with this Salman Rushdie quote:

A poet’s work is to name the unnamable, to point at frauds, to take sides, start arguments, shape the world, and stop it from going to sleep. 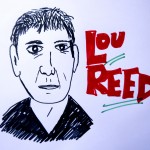 I was out of the country when Lou Reed died, and only heard the news a few days later. He, along with the early era of a dry/smart/clumsy Chevy Chase, probably shaped my adult aesthetic as much as anyone or anything. But mostly it’s Lou. He was an artist, even if he tried to sabotage himself (or Metallica) from time to time. He spoke, sang and played plain. You weren’t sure if he was always serious. He seemed grumpy and self-righteous. Yet delivered, throughout his 71 years, more epic moments than a Top 10 list can sum up.

Most obits dote on his few years with Velvet Underground and highlight a handful of solo songs (“Walk on the Wild Side”). But it was his ever-changing, often spotty, solo career that was the most interesting to me. Even when he wildly missed his targets (a double album on Poe?), his aim was always right.

Be it, a concept album about suicide (the way overlooked “Berlin”), or skipping a fashionable tribute to AIDS in the ’80s to make an album about cancer. His use of backing vocalists is often inspired or funny, like the faux Carly Simon in songs about Scorsese films. In 1978, he asked a befuddled Bruce Springsteen to recite a reworded version of “Born to Run” in Lou’s epic 11-minute orchestrated song of ODs (listen to “Street Hassle”).

Or he’d keep you guessing with the details, like the plainly obvious (“what a nightmare to have no women in the world!”), or the tricky (the backing track of overheard conversations suddenly jolting into red in the eery “Kicks”) or audibly pointing out where he chipped his tooth as he sings it (1983’s “The Last Shot”). Or even throwing in a “missedunderstood” or “argluing about football” to see if you’re paying attention.

When punk and disco were in full force, Lou wrote little jazz songs about Charlie Chaplin (“City Lights”). Later, he asked a Tai Chi master join him onstage for a tour, around the same time that he sang, in complete and apparent earnest exasperation, to a partner who caught him in bed with someone else (the 2000 song “Mad”):

I know I shouldn’t a had someone else in our bed
but I was SO tired, SO tired
YOU SAID you’re out of town for the night
and I BELIEVED IN YOU, I BELIEVED YOU…
it makes me so mad
it makes me SO-O-O-O MAD

That is absolutely hilarious. All of it, I mean. Inspired, original, simple. Even art. Certainly weird. And so little of it made him much money.

God, but travel could use a little more of that.

No field of writing or activity is more choir-based than travel. There’s nearly universal acceptance that it’s good for you, eye-opening, fun. It is, sure. I love it. But argument or artful non-monetized gestures are rare. Even when empty buzzwords take over – particularly in the ever noisy world of travel “content” – few seem ready to say “wait a minute,” or at least point out the details that makes it all so worthwhile. And add something no one else thought of.

Travel needs some Lou Reeds. Even if it’s occasionally just to borrow his own words and let go with an “ooh ooh wee, son of a B!”

One Response to The Lou Reed of Travel