unFACEBOOKING in April – a rolling ticker

Lately I’ve been wondering if my constant attention to social media has become an addiction. Connecting online can be useful and fun, sure, but I let it take too much of my attention. And most of the time, to be honest, it makes me mad. And the recent flurry of news of Facebook’s data breach affecting 50 million users [UPDATE: 87 million, which Facebook buried in an unrelated statement this week] during the 2016 presidential election played a role in this e-ennui too.

So I’m treating myself to a “cleanse” – by abstaining from social media all April – to see how it feels. I’ll regroup in May and see if I can reconnect in a more constructive manner. Or not.

Meanwhile, I’m posting missives here as they come to mind at times when I’d normally share them elsewhere. Hopefully I’ll start forgetting to do this soon.

It’s been over a month since I broke from Facebook, Twitter and Instagram. I honestly don’t know when I’ll go back. I feel good out here.

You should know that I’m watching a lot of hockey. It’s overwhelmingly the most exciting sport, particularly during the playoffs. You should get a VPN, pretend to be in Canada, and stream it (free) from CBC.ca.

I returned from Oklahoma where I researched an article for Oklahoma Today on the Little River, which rumbles clear from the foothills of the Ouachita Mountains, dams into a lake, then remerges brown, feeding swampy sloughs home to alligators, as it hits the Arkansas border — marking Oklahoma’s lowest point.

No one really knows much about the Little River. It’s most impossible to follow. I can’t figure out when/why it got its name. A little weird bird called the Swainson’s warbler calls it home. I spent a couple day with birders there. An expert likened it to Christopher Walken. “You never know when it’ll suddenly appear, do something weird, then disappear again.”

I had an absolutely superb time.

Wired says deleting Facebook is basically “showy but pointless moral grandstanding.” I can say spending a month (for starters) without it feels pretty good.

I remain amazed how much everyone is taking for granted that someone worth nearly $40 billion could do that to us with no ramifications. I can’t think of another business that’s made remotely equal goof that warranted such a collective shrug of indifference.

Spoke at National Geographic in DC yesterday about my December trip to Abu Dhabi. It went well. A couple who lived in Oman in 1973 told me they loved my speech and were literally going to out to book a trip now. Which was sort of amazing to hear. I told them they’ve forgotten more than I’ll know about that region.

I got to do the raffle of a couple give-away books then help with an Emirates Airlines ticket giveaway. I hadn’t done that before. Hope it didn’t show.

Have a few hours this morning and might see some museum.

Spoke at VisitSeattle’s annual conference yesterday on how to travel “like a travel writer” and why the travel industry should think more about WHY they’re in the business than HOW to reach people in these prickly times. Great event.

I ended with these thoughts:

The world seems pricklier than it did five years ago. Is travel doing enough to share that it knows that people — regardless of culture or language or belief system — have much much more in common than anything the divides them. Travel knows people everywhere are more prone to like you and help you than anything negative.

So are we sharing this top travel lesson enough to those who don’t get to travel?

Apparently not when people echo a misfit leader blanketing nations as “shitholes,” contemplating bans based on religion, or calling an ethnic group coming to the US “rapists and murderers.”

That means more people’s data was unwillingly sold and used for political purposes, due to the sloppiness and lack of transparency by Facebook, than people live in the American West, Great Plains, the Rocky Mountains, Alaska and Hawaii.

If Mark Zuckerberg gave EACH of these people $300, he’d still have about 5 billion dollars to live off. Everyone in Los Angeles. Everyone in Phoenix. Everyone in Seattle, Honolulu, Denver, Portland. Everyone in San Francisco. In Las Vegas, Albuquerque, Anchorage, San Diego, Oklahoma City, Omaha, Salt Lake City, Boise, Tucson, Sacramento. Every single person, $300.

We should think about that a moment.

Yesterday he made a case he didn’t run a monopoly. We know he does, beyond any doubt, because of how few people have left Facebook.

I’m going to Seattle by train.

I saw the best sales table of all time at Fred Meyer yesterday. 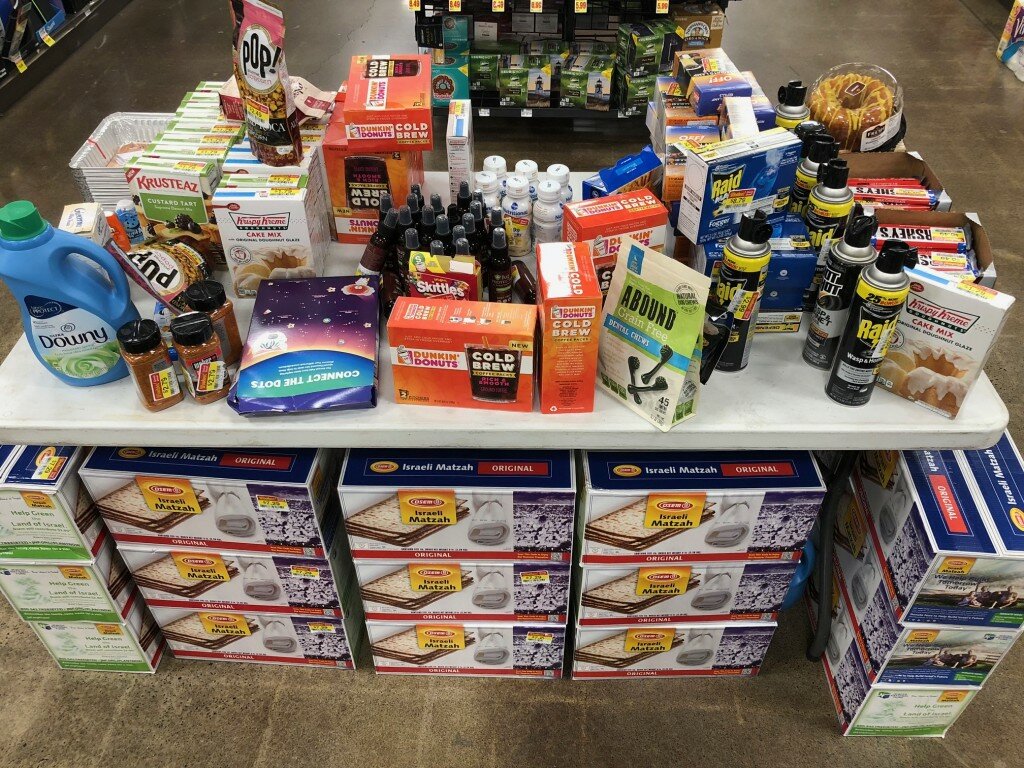 Google’s iCloud is a relentless mosquito. I hate it. It fills up. I pay for more storage. It mysteriously fills again. Sometimes, like now, I can’t access it. It keeps coming, it keeps coming. It kills my soul.

Just had to create a new Apple ID password for the fifth time in the past four days. #AnalogKid

Always loved “The Hexx” by Pavement. I found this alternative version today, heard for first time.

I saw “Lady Bird.” It was OK. Cannot believe how poised the Portland audience was to laugh at it. Leaning forward in their seats, waiting. Conference-laugh.

“Colossal” was better. Much better. I laughed and laughed at that. And no one talked about it.

Canadians are absolutely obsessed with whatever Canadian is. More likely, that no one knows what it is.

A few years ago, I was in Banff shortly before Canadian Day – and counted at least five articles in one issue of Globe & Mail asking this question. Pierre Burton, one of Canada’s most popular historians, once wrote a book as a letter to Americans trying to describe what Canadians are (Why We Act Like Canadians).

There is, for example, no national mythology surrounding the idea of Canadian independence; that’s because try as our forefathers might, it’s not easy to construct an inspiring story out of representatives traveling to London to request greater autonomy while remaining within the British empire. This is how “peace, order and good government” came to be the Canadian answer to “life, liberty, and the pursuit of happiness.”

I’ve long respected that Canada’s “mythology” began not by war, but compromise. I think they could be proud of that too.

If I were on Twitter, I’d say something about that and make sure I’m following Canadaland.

I’ll admit it. Whenever I want to remember the day MLK died, I have to think of the U2 lyric. “April 4, shots rang out in the Memphis sky.”

I’m not sure how I got out of my 20s without ever seeing “THE YEAR PUNK BROKE,” the incredible Super 8 documentary shot on the Sonic Youth/Nirvana tour MOMENTS before Nirvana became NIRVANA. It’s on YouTube in full. So I watched it last night. Sad to think within three years, and three Nirvana albums later, Kurt Cobain would be dead. The grainy video is everything of my real band years. Making videos on Super 8 — making public access TV shows in NY on oversized VHS camcorders. We were an interesting generation. Coming out of the ‘80s. It’s heartbreaking to see this moment before it all broke open. And then the marketers gave us Gin Blossoms and Deep Blue Something.

It happens right as the USSR folds too. That’s weird.

I’ve had to change my iTunes password twice in the last three days. My computer keeps asking me to sign in. I cannot print my new password directed towards them in this family-friendly space.

And twice more in the last two hours. I’m about done. When I take a record off the shelf, it (usually) comes.

I listen to Charlie Parker while working on a keynote speech for VisitSeattle next week. My clarinet teacher in 8th grade convinced me to switch (briefly) to sax. Then he convinced me to buy a Charlier Parker book with all the songs laid out in handwriting. Doubt it was a copy of Charlie’s writing. All I wanted to do really was play guitar. So I did.

I learned, via NPR, Trump said something weird yesterday.

It’s been two months now since a ReachNow car ran into my car and drove away; an eyewitness reported it, I told the police — and neither ReachNow or their insurance company have played the “call later…” stall game ever since. That’s the lesson, kids. Ignore stuff. It’ll go away. Zuckerberg and Trump know it well.

Speaking of, Zuckerberg – who said it was “crazy” to consider foreign manipulation of his platform during the election – upgraded the numbers of people hit by the Cambridge Analytica data breech from 50 million to 87 million today. That’s a 70% rise that now totals two-thirds the number of American voters.

He puts his trumpet through a wah-wah pedal. I should do that with my blog.

I read yesterday in Ted Gioia’s The History of Jazz that most musics, and certainly “ethnic” ones, resist change. Jazz was truly modern in that it evolved, changed as a matter of course from the beginning. I wonder if rock’n’roll is guilty of not welcoming change more?

Of course Miles sure took heat for fusing jazz with rock.

Shooter at YouTube, just heard via text. My instinct is to look on Twitter. I don’t. I just see a tiny report on CNN.com. I can wait for more details, I decide.

No one has contacted me via my website. I looked a few times today already. I’m pitiful.

I subscribe to Wired the other day. It’s only $1.50/month, online and print. And I feel I should read more about technology. I read half-way through a story on the history of memes — interesting, Richard Dawkins’ roots from 1970s — then stopped to update unFACEBOOKING.

It doesn’t feel that “masochistic purist” to disconnect, as someone on Facebook a week or so ago when I first threatened to leave Facebook. But I do feel steady pangs, like after a breakup.

I deleted my Twitter, Facebook apps off the phone. I check email more often. Then put down phone. I honestly feel a little more present.

To make up for absence of routine checking — I wonder how many times a day? — I’m looking at magazines more. The New Yorkers, the Harpers, the NY Review of Books lying around, making me feel guilty for ignoring them.

I read a lot about the band Heart. And found the Wilson sisters’ childhood home in Bellevue, WA on StreetView.

Their first one, Dreamboat Annie, is much better.

Did you know that Shakey’s Pizza founder is in the OKC Banjo Museum? He used to play banjo. Once TONS of Shakey’s — now only four remain outside California. Plus Philippines. One is in Seattle suburb. Inspired a song on “Bebe Le Strange.”

I want to tweet that the thing I miss about twitter most is getting mad at other people’s tweets.

5 Responses to unFACEBOOKING in April – a rolling ticker