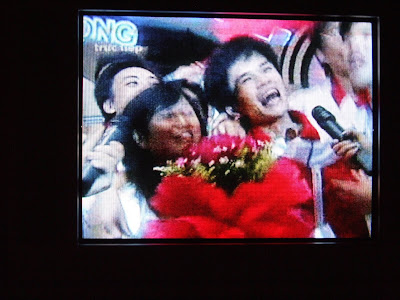 BETTER THAN A MUSEUM?
Travel isn’t a full-time deal unless you let it get out of hand. I find — whether I’m in Yakutsk, Sliven or Bac Ha — I end up turning on the TV a bit, if there’s one available. Coming into beautiful, cool, mountainous Sapa — exhausted from motorcycle failures, overnight trains and a week of Hanoi heat — I turned on the Mountain View Hotel’s TV and found two Vietnamese channels and Star Sports channel playing a 1970s Wimbledon game without announcers. I went Vietnamese and found two FANTASTIC shows.

For starters, I lucked into seeing the last half hour or so of ROBOCON: 2007 Hanoi, a (apparently Toyota-sponsored) competition of robotic devices manned by teams from around Vietnam. People in the audience — wearing headbands, waving flags, standing the entire time — yelled for the Hanoi teams and politely golf-clapped for teams from Saigon and Danang and Vinh. At least eight announcers made sense of the game — a few wore ‘goofy’ ties. That said, the whole thing, without understanding what was said, couldn’t have been taken more seriously.

Apparently it’s a single-elimination tournament with four-man (always men, not my fault) teams running with manual controls around a ‘playing field’ with steel rods and blue, red and gold cubes that they picked up by their robotic devices and placed onto them. Scores ebbed and flowed — up and down — so apparently you could deduct points from opponents. I never figured it out. Danang shut out a Hanoi team 9-0 in the final and erupted in more joy than the Colts showed after their recent Super Bowl victory (this is not an exaggeration). 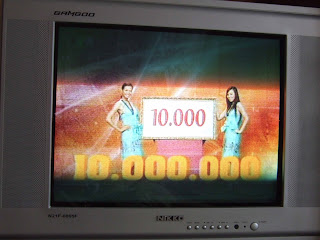 The next morning my research had a bit of a delay as I stumbled upon the 40-minute version of ‘THE PRICE IS RIGHT’ called ‘Hay Chon Gia Dung.’ Fascinating viewing. They had the audience with the same gold tags, some of the same music (but sadly no Cliffhanger game with the yodeling guy and the mountain… or the gay MC with the forced smiles on camera). The ‘Bob Barker’ was reasonable enough, but a bit gruffer than Bob’s warm way (and no mentions of neutering your dog, something that NEEDS to be done in Vietnam). He did borrow the… ‘are you sure you’re ready?’… to add suspense before unveiling a winning prize. ‘Bob’s Beauties’ seemed more stiff to the task, occasionally fumbling a product demo. Like Bob Barker’s version, four contestants are ‘called on down’ to bid on cheapie prizes to win bigger stuff. And a shot at the $1.00 wheel.

The key difference in the Vietnamese version was TACTIC. Vietnamese — born for this show, it must be said; the audience were as animated as if they were watching robotic wars — didn’t get the bid-a-dollar-over-the-highest-bid scheme to get up on stage. A sample bid of the four would-be contestants went like: 110, 130, 100, 125, with 125 coming last (think about that for a second). Prices, too, were a lot lower than we’re used to — getting on stage meant bidding on $50 products, and the grand showcase was flooring worth about $250. In some games, you had a one-in-two, then one-in-three, then one-in-four lottery-style guess to win something like a moped. The odds are against you.

Both of the showcase winners way overbid. Guess they were shocked at the low value too.

But two of four contestants got exactly $1.00 on the wheel, of all things, but didn’t get to ‘reach’ into Bob’s pocket for a hundred-dollar bill. Some things don’t translate, I guess.