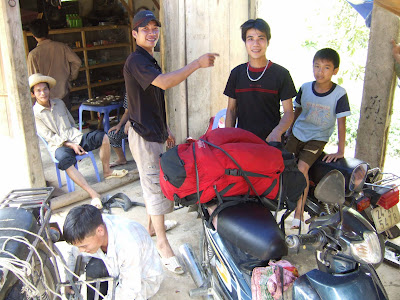 I’ve long been saying that in Vietnam anything’s possible: where there’s a will, there’s usually a way. I may need to revise that after a disasterous two-day trip to Bac Ha, a minority town of H’mong people near the Chinese border, an overnight train trip north of Hanoi. Most people come this way to Sapa, a mountain valley town of 1600m — facing Mt Fansipan, supposedly the highest in Indochina. I plan to go, but timed my trip for Bac Ha’s Sunday market first. If all went well, I’d arrive early enough to see the Saturday market at nearby market at Canh Cau too. It didn’t.

Off the train in Lao Cai at 7.30am, I left the streams of foreigners piling into white minibuses to Sapa, an hour west, and rented a Honda motorbike in a cafe and headed ‘about two hours east’ to Bac Ha, a 66km trip. About 50km there, weaving along green pointed mountains, an occasional truck passing me on a blind curve of the 1.5-lane road, the bike started to sputter and died. A summary of the next eight hours:

* restarted, and died
* coasted 2.5km downhill engine-dead
* restarted and went 1km uphill to a thatch-roof shacked labelled ‘xe may’ (motorcycle)
* getting a new spark plug (not needed) for 30,000D and taking off
* 4km uphill, engine dies, I coast down 2.5km after several failed tries to restart engine
* tried to push bike in 90-degrees uphill, with my backpack balanced on seat
* guy stops and ties rope to bike and pulls me to shack again (after much discussion; he asks for 50,000D — about $3.10)
* shack guy: Doan — a young guy in black slacks, black muscle shirt, stylish hair (impossible to imagine in the Vietnam countryside not long ago) — puts in new engine parts ‘this will cost 600,000D’ (about $38) — I’m helpless, it’s way too much for something the renter will never pay back, but agree
* wait five hours — village has ‘foreigner rotation’ with pipe-smoking grandmothers, pregnant 19-year-olds, relentless kids (yelling ‘xinh chao’, handing me live beetles) around me every second
* after dark, I arrange a moto taxi to Bac Ha, 19km away — a whopping 100,000D ($5.50 or so, too much)
* next day, I taxi back (half the price) and Doan asks for $100, I negotiate down to $60 — while he climbs barefoot up a tree to get me plums — and I drive off
* 3km later it dies and I wheel to another xe may shop, of Mr Tong, who fixes it in 10 minutes for 20,000D ($1.20), invites me in for tea, photographs me on his phone, offers me a local girl ‘for a wife’
* I ride on no problem, don’t say a word to the renter when I return it — any though of getting my rental fee back (about $7 a day is a laugh, and siting changes in their bike could lead to more problems, and ‘repairs’ — the bike’s definitely riding better now, so I certainly don’t feel guilty about it)

I’ve had many such mishaps before but all ended as easily as my second encounter. When researching Vietnam, you hear many complaints (today, an Israeli tourist got mad at an ATM not working here in Sapa and punched through the glass door of the ATM booth… two hours later it’s fixed, but not the ATM… really got to wonder about that guy)… I willed myself not to get angry that I was basically taken advantage of by a mechanic who seems to know little about bikes. A person in Sapa told me, ‘In Vietnam, if there’s a problem with the bike you rent, you have to pay for it.’ So I can’t really fault the renter.(But just imagine Hertz saying the same? Renting worn-out, old vehicles you have to fix when things go awry?)

In some ways, Doan sees it as his right — few foreigners go there, they come with Swiss Army watches, digital cameras, fancy cellphones (I’m guilty of all three), and so a little money is part of the deal. When I left he felt as a friend waving to a new friend. Why argue, really?

But I kept the old engine parts. Anyone want to buy them? 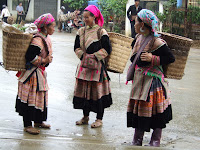 PS — Bac Ha was gorgeous, and its market — where hairy piglets squeal, H’mong outfits get sold (to fellow H’mong) and guys stop to smoke in bong-like water pipes at a stand for the purpose — was worth the struggle (though I found dozens of tourists come by EZ daytrips from Sapa, alas).

PPS — I’ll try to get photos up of all this soon.