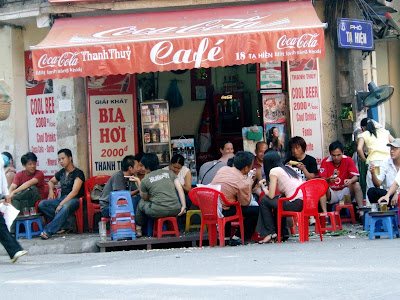 Or One Glass of 15-cent beer
If you look at a world map and think a bit, there are very very few countries, where you have more than one major, world-known rival cities that divvy up political, cultural and economical duties over the centuries. France has Paris, England has London, Greece has Athens, Mexico is dominated by Mexico City, Argentina by Buenos Aires, Turkey (with all respects to its relatively modern capital Ankarra) by Istanbul. Vietnam — like much bigger countries, like Russia, China, the US, Canada — has two big players, Hanoi and Saigon. That makes the slender, but vastly populated country, a bit unique.

Last October and November, I updated the first installment of the ReidOnTravel guidebook in the south — going around the Mekong and spending a couple weeks in my former home, Saigon. Landing in Hanoi last week — a city I had always considered more beautiful, but didn’t know as well — I struggled a bit to see the link between Saigon and Hanoi. Sure, the traffic is manic, street vendors wear conical hats and hoist noodles and fish heads in baskets over a bamboo pole on their shoulder, and the language is even a clearer version of the southern slur. But in Saigon, walk into a room and people notice you — you get smiles and conversation everywhere. Hanoi’s different, more beautiful, but less friendly — at least by comparison. This predates the 20th century, according to many I talk to. Some claim Saigon’s built for business (always has been — way before American GIs or global backpackers were trolling for beer or banana pancakes), and Hanoi’s for poets, musicians, artists. My pal, a Hanoian for life, Nam says, ‘Two big differences here: the weather’s worse and the people are more cold.’

I’ve spent much of my first week checking hotels in the Old Quarter — known as ’36 streets’ for the streets named for the product made on them (herb street, bamboo pole street, tin street etc) — and going to museums. In the Hoa Lo Prison (aka the Hanoi Hilton), where Americans including John McCain spent years as POWs (McCain, to his credit, was the only prisoner who held his head high in his mug shot — the others looked, understandably glum and head-down.) Elsewhere, taking much of the central streets by foot, I’ve had a mix of disinterested stares, motorbike-taxi hassle and scattered animated conversations in broken English from hotel staff. One talked about business potential, another teased a female worker for my benefit. On a fruit juice stop int he shade, I met a 22-year-old Australian, who just bought a Russian-made Minsk motorcycle. He’s recently married a bar owner Vietnamese woman from the countryside and they’re expecting a baby later this year. (I did the math — she was about a month pregnant on wedding day.) He said recently he was wondering about the country though. ‘People are the opposite of us. Not just here, but all of Asia,’ he says, which makes me wonder if he’s really ready for the long haul in Vietnam — and his impending fatherdom. He invited me to their bar for a beer, and to a hole-in-the-wall for some particularly tasty bun thit (rice noodle soup with pork, much different than Saigon’s bun thit nuong).

But my newly reacquainted connection with Hanoi only started to emerge, along with the fall-out of a stubborn jet lag, just doing what Vietnam’s best for — sitting and staring. Particularly at Hanoi’s abundant, wildly popular bia hoi streetside ‘bars’ with plastic chairs spilling off the curb and selling glasses of beer from a keg for 2000 dong each (about 15 cents). The 60-year-old guys who run the place — skinny, shirtless, drinking their beer with you — chuckled as police came to get nearby bia hoi’s to move theirs seats off the street. ‘One more?’ they asked, just as my glass was empty. Saigon doesn’t have the bia hoi culture, and it’s missing out. ‘Sure, one more.’

NEXT: By train to near the Chinese border, overnighting in Bac Ha

3 Responses to It Takes Five Days to Love Hanoi