I have no idea how many articles I’ve written. But I probably know the dozen I’m most proud of. 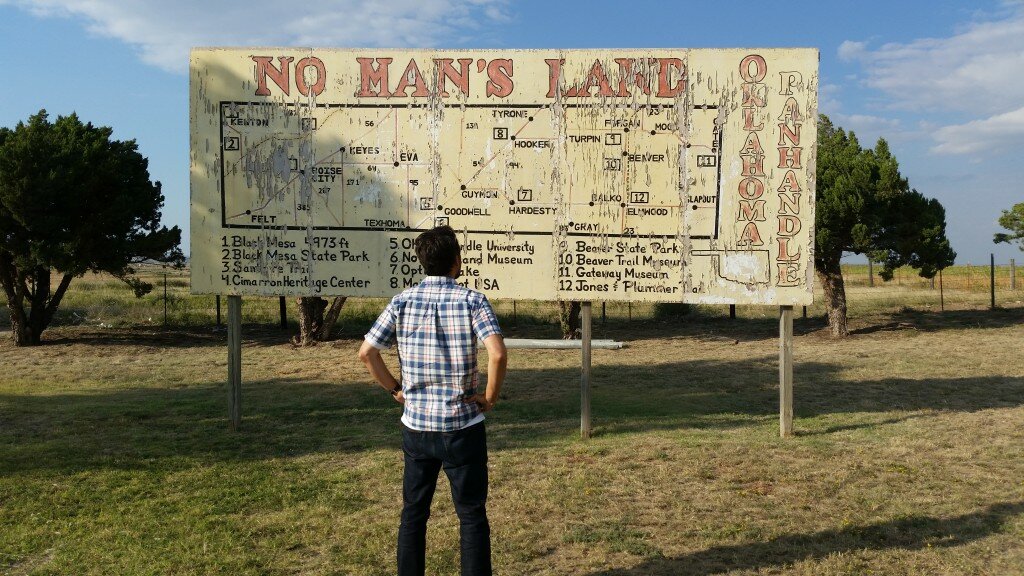 My first travel article appeared in the Vietnam News in 1997. Ever since, I’d been clamoring to get to the Oklahoma panhandle and treat the USA’s most unlucky (and unwanted) rectangle of plains as a travel destination. It’s about all I talked about in my first Lonely Planet interview in 1998. Finally, in 2015, I did go. With my 76-year-old uncle from Ponca City, Oklahoma, who warned me I’d be exposed to a lot of “old man stuff” on the trip. The story won a couple awards. Which is neat too.

Some see listicles as something of a “necessary evil” in travel publishing. I’ve always liked the ones that feel like they really add to the conversation of a subject (this one tackled the best presidential site for all 50 states). Michael Yessis, who co-founded the wonderful World Hum, asked me to do this – and I had way too much fun with it. Using state traffic reports, I calculated traffic-density ratio scales by interstate and gave nicknames. My favorite: I-10, which hugs the southern border, became the “Neck Beard.”

I wrote three little articles for the New York Times. This, on the Bulgarian capital’s Studentski Grad, was my first – and favorite. Gray socialist-era dorms in the university area of town have been transformed into a district of night clubs. It’s not pretty, but it gets pretty crazy. I learned about this while updating a Lonely Planet guidebook. (I learned basically everything I know about travel while updating Lonely Planet guidebooks.)

I believe this to be the first, of many, articles that declared Colombia’s security situation has improved enough to go. People, you may remember, used to be really scared of Colombia. Everyone talked about cocaine, cartels and kidnapping, and didn’t consider the only South American country that had Caribbean and Pacific beaches, plus Andes and the Amazon. It’s great. Plus there are games where you can throw iron weights at dynamite. Everyone wins.

John McPhee once wrote a fantastic book after following a Wyoming map-making geologist around the most geologically diverse state. So I followed around the successor to the same geologist. And he made me a tuna sandwich and brownie, and showed me how to love the part of the state without the Rocky Mountains. I loved this experience.

A sports blog wanted sports-blog content. So I pitched “Loser of the Week,” a mostly hand-drawn celebration of the best losers in college football. I got something like $50 per story. It might be the favorite thing I’ve done in my career. And would have continued if the blog has lasted longer than a few months. Here’s one of the posts, where I put the state of Florida on trial.

WHY YOU SHOULD VISIT THE GULF COAST (June 2010, Huffington Post)

Sometimes only travel can fill the gaps left from traditional journalism. And after the BP oil spill in the Gulf of Mexico led to looping shots of gurgling oil offshore, people started cancelling trips to a region finally recovering from the aftermath of Hurricane Katrina. But the beach itself told a different tale. I was the only person in travel media to visit. (I begged Lonely Planet to send me.) We got onto MSNBC to talk about it live from the beach, the same day President Obama visited, and I wrote this piece.

I believe, no matter how long or how far we travel, the ultimate destination is home. (I wrote about it once for Nat Geo even.) And Oklahoma, where I grew up, will always be my favorite place to write about. I didn’t expect this story to fall in my lap – a celebration of the 150th anniversary of a long-gone cow trail that linked Texas with Kansas. The toughest part, I came to learn, was Indian Territory. And followed the ghosts of cows (and cowhand drovers) through this area still requires some creativity. But it worked out. Even fellow AA Jaggers mate Kim Mott had fun.

When Lonely Planet asked me to write about Bulgaria’s Black Sea Coast, I said I would, but “only if I can buy a sky blue 1972 Moskvitch for $300 instead of renting a car.” It was the ultimate ice-breaker. Until it broke down.

THE ART OF BEING PRESENT: WALKING IN KENYA (September 2015, National Geographic Traveler)

John yells out “ants, terrible terrible ants!” and runs away, slapping his legs. When your guide is freaking out – anywhere, and particularly in a jungle trail in Kenya – you follow. Fast. This is my experience of hiking and biking in Kenya’s Rift Valley.

I’m not sure how I feel about “footsteps” articles. Sometimes it feels like an easy sell to editors. But a subject that can wear thin as you go… While following Robert Louis Stevenson in France (with a fake donkey), for example, I decided to stop following Robert Louis Stevenson – which is where the trip got really good. While updating Lonely Planet’s Russia guidebook, I couldn’t help but keep Anton Chekhov in mind. After all, he crossed Russia (just before the Trans-Siberian got built) to be, in effect, the world’s first “gulag tourist.” He wrote about it in a damning book, and the locations today are pretty grim. Glad I did it.

I begin: “There’s no way to know the precise percentage of Russian men who wore moustaches in the first decade of the 1700s, but if you’re like me you’ve spent some time wondering about it.” And so, while researching the Trans-Siberian Railway for Lonely Planet (and writing this award-winning blog), I counted moustaches. A lot of moustaches.

Incidentally, my extinct blog, THE FAILED BANDS OF OKLAHOMA, championed fictional battle reenactments and bands that failed in/out of Oklahoma, and it also once fell in love.