In the Navy: Travels on the USS Fort McHenry 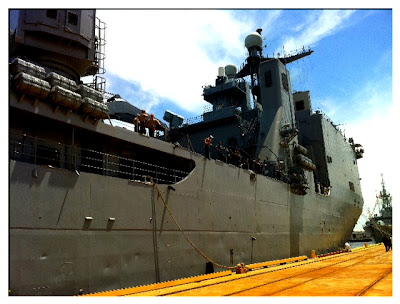 I never considered going into the military but I’ve nevertheless saw the US Navy as my ‘armed service of choice.’ My dad served a couple years, and finished his tour of duty a few months after I was born — at the Naval Hospital in Portsmouth, Virginia. So that sort of makes me a navy brat, right?

Recently I got the chance to spend a couple nights aboard the USS Fort McHenry en route from Norfolk to Baltimore, and I jumped at the chance for a glimpse of the experiences my dad had during his European deployment decades ago. It was fun. I shared a tight three-berth bunk space with a couple pilots. I got lost in the maze of confusing inner passageways. I snagged a late-evening PBJ with a rather intense marine officer. And reaching Baltimore, I stood on the deck as we passed the ship’s namesake Fort McHenry (which inspired a certain poem known as the ‘Star-Spangled Banner’) and docked in time to join Baltimore’s Sailabration for the 200th anniversary of the War of 1812.

Being aboard a ship was eye-opening, more easy going than Mountie school (for this civilian anyway), and a real privilege I won’t forget.

I have some video coming of sailors sharing their ‘dream port’ for a five-day pass. Meanwhile, here are some photos.

One Response to In the Navy: Travels on the USS Fort McHenry