Top 2 Civil War Things to Do 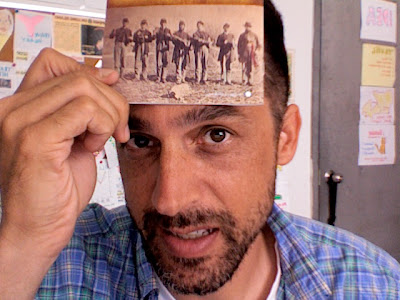 The Civil War is 150, which means four years of particularly robust re-enactments and a lot of new Civil War books. Even a CD or two.

Here are two things I recommend doing to tribute the occasion:

Do you know this 1986 documentary? At nearly three hours, it’s way too long, but simply impossible to stop looking at once you start.

A heart-broken, deadpan-hilarious film-maker Ross McElwee (mostly behind the camera) wants to retrace the tragic figure of William Sherman on his (in)famous rampage through the South, a region he had loved and spent much time before the war. But McElwee’s girlfriend dumps him after McElwee gets the film grant, so he ends up loosely following Sherman, while mostly flirting from behind the camera with a string of mesmerizingly bizarre southern women (a rocker, a ‘prophet’ actress, a Mormon, a hermit).

I made this two years ago at Gettysburg, and still await the answer on how Civil War re-enactors decide who dies first.

If pressed, I’d have to admit no one really knows.

One Response to Top 2 Civil War Things to Do