What I learned from my 2016 travels

Ah, New Year’s Eve. The time of year when many travel writers share a list of all the travels they got to do in the past year and often a “best of travel” list for the next one. (Heck, I made one,  which I believe is the only one geared to Trump voters.)

From Bowie to Trump, 2016 has been very bad. And regardless of my great travels (Ethiopia, the Yukon, Australia, Cuba, Thailand, all over the US), the US election results have left me ashamed of my nation and feeling uncertain how to move forward as part of it.

Travel can broaden people’s views. This, I know; I’ve been involved in travel publishing for 19 years. Yes, it’d be great if more people could travel the world, but often they can’t.

Travel writers and publishers can help fill the gap, if they aim the right way. (A couple years ago, I called for bigger leadership in travel.) But still, some writers and “influencers” have come off as tone-deaf to me. The sponsored chat forum #TravelSkills, for instance, tackled “boutique travel” a couple days after the election (at a time when my hometown was rioting). I’ve seen a few travel writers bragging of how “great” 2016 has been, apparently based on their hosted trips marketers made for them.

This does little to support the unpopular case that “travel expertise” — thus our careers — is a valued commodity.

Initially, I said I wouldn’t gloat about my busy 2016 travel year. But I decided to try to tell you some of what I learned. I hope there’s some value to it.

Outside US cities, you see zero Hillary signs. I’m a red-state expat who’s lived in blue-state America the past two decades. This year I took a roadtrip across New Hampshire (red state) in late spring. I went to Oklahoma (red) three times. I drove from my home in Oregon (blue) to Idaho (red) and Utah (red). From DC through Pennsylvania (red). And I saw zero Hillary signs, only Trump signs.

While most of the social media world gloated over Trump’s immature (and effective) campaign, most of America was receiving a different message. We know that now.  This truth was right in front of us all along, even if the media missed it. Travel showed it.

Australia respects its native population better than Americans do. I did an article this year on Melbourne (my home for part of 2002) and went to a tourism conference on the Gold Coast. I saw multiple aboriginal murals in Melbourne. Buildings with surprise “trompe l’oeil” depictions of aboriginal leaders. Every speech I heard began with respect to the nation’s original residents. Now, Aboriginal Australia history is a tragic tale too, but I was encouraged to see the culture present in daily life.  I’ve never seen anything like that in the US, where many Americans cannot even name a single Native American and nearly everyone was complacent over Standing Rock.

We can do better. 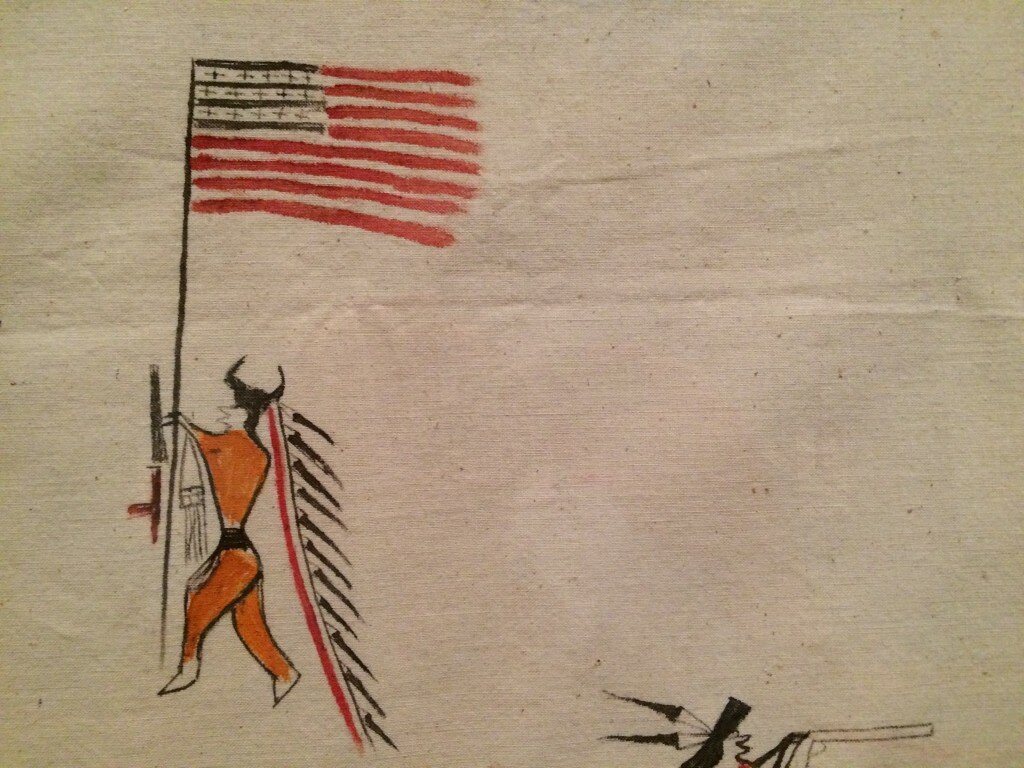 Oh, Australia also has great sunsets. This is at Byron Bay. 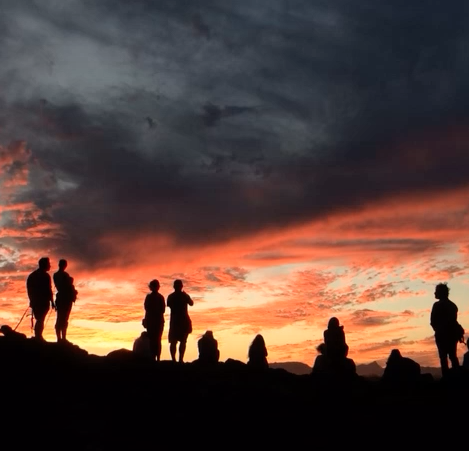 Ethiopia has double the female lawmakers than the US. Women make up for 52% of the US population, but on 18% of its elected government positions. Live Aid in 1985 has filled the world with images of famine, something many here resent. Another thing Ethiopians resent, or at least some do, is Indiana Jones. “Everyone knows the Arc of the Covenant is in Axum,” one local told me. “But the movie says it’s in Egypt!” The hottest, lowest inhabited place in the world is in the Afar region (shown above). Temperatures break 120 degrees. People live without electricity or running water, in huts built by lava rock. 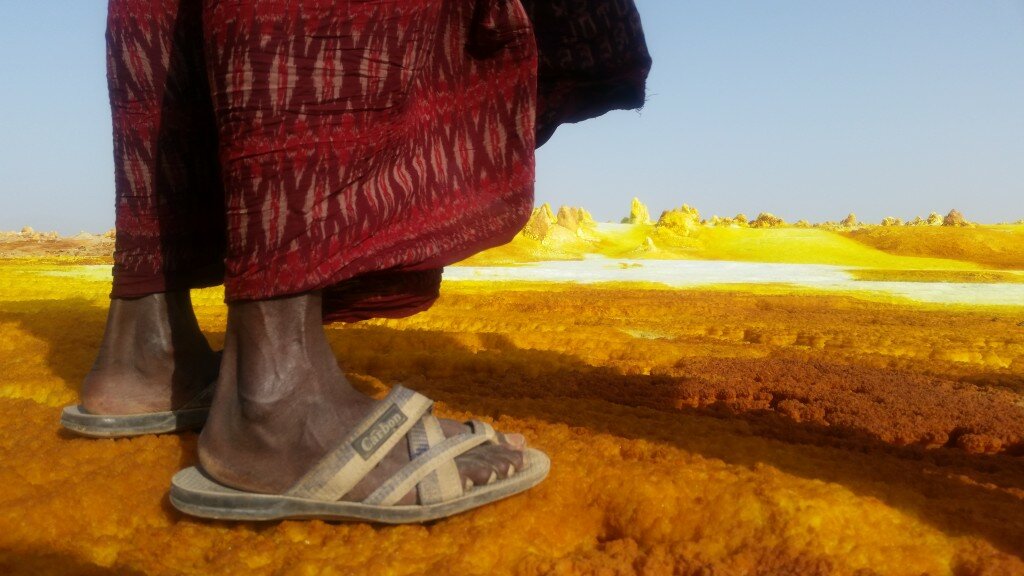 The USA doesn’t like an underdog. Just look at the new 1%-er president-to-be, who mocked the disabled, groped women, judged others by looks, zeroed in aggressively on minority protestors, called Mexican immigrants “rapists,” mocked Muslim parents of a US soldier killed in action, promised to build walls. In the USA, even journalism is an underdog.

That we root for underdogs is a myth when 60 million people vote for this: 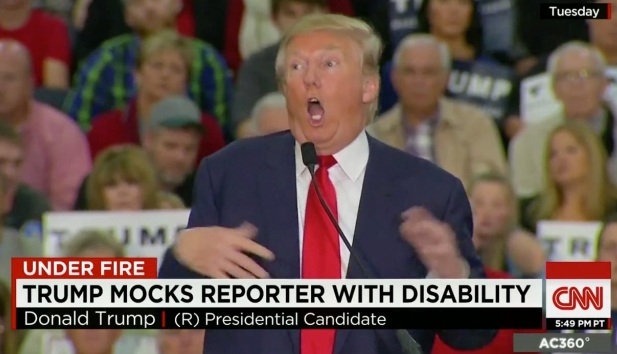 Of all things, I won a trip to Canada. I could go anywhere and I picked Quebec. My seven-year-old daughter Ruby and I visited Quebec City then took a train to Montreal. Saw circus events in the latter, boated on the St Lawrence and ate crepes in the former. I learned Quebec is a big hit for seven-year-olds on their first Canadian trip. 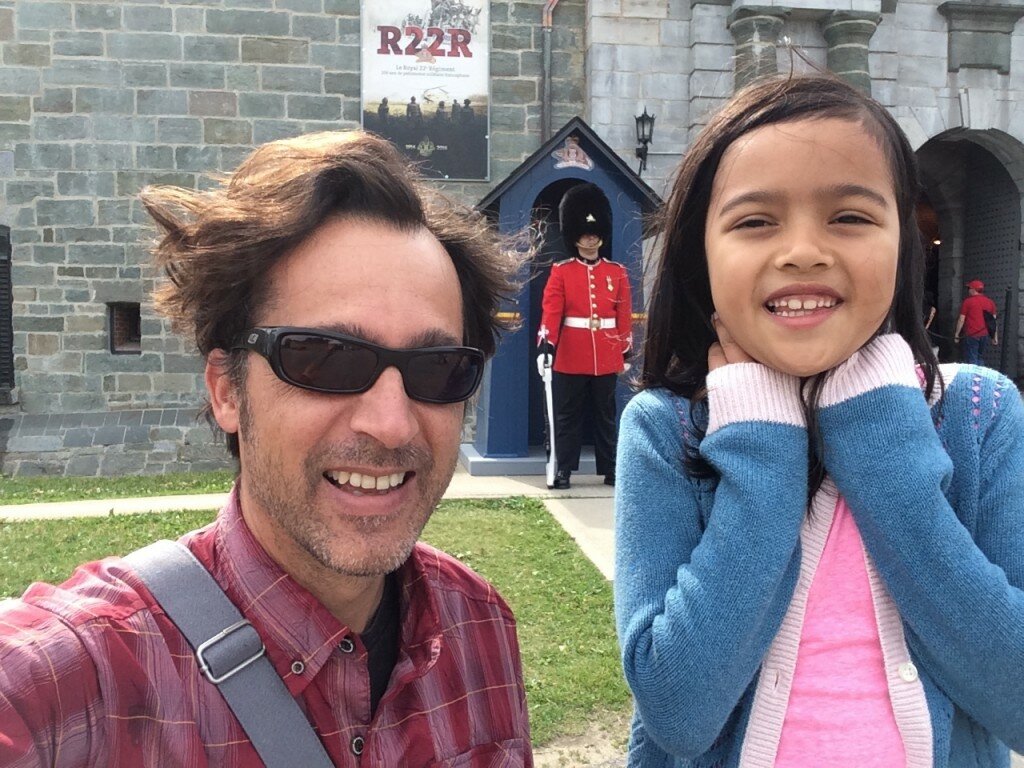 Ruby’s eighth birthday, by the way, is inauguration day, January 20. “I’m sad that we won’t have our first girl president on my birthday,” she said after November 8. “Maybe Trump will be impeached.” I hadn’t introduced politics to her.

I stayed at a Muslim home this year, and was not killed. Trump champions fear of Muslims. It’s hateful and uncomfortably reminiscent of 1930s Germany. Maybe things would be better if more Americans actually met and talked with a Muslim. I’m guessing very few have.

This year, I wrote about homestays in Thailand. On the days I stayed in homes, I didn’t see a fellow traveler. The last one was with a Muslim family on an island near Krabi beach resorts. Endless tables of fresh seafood, and walking out with clam fishers at low tide, nearly a mile out of sea, with rivulets marked in the sand. It was a remarkable experience. 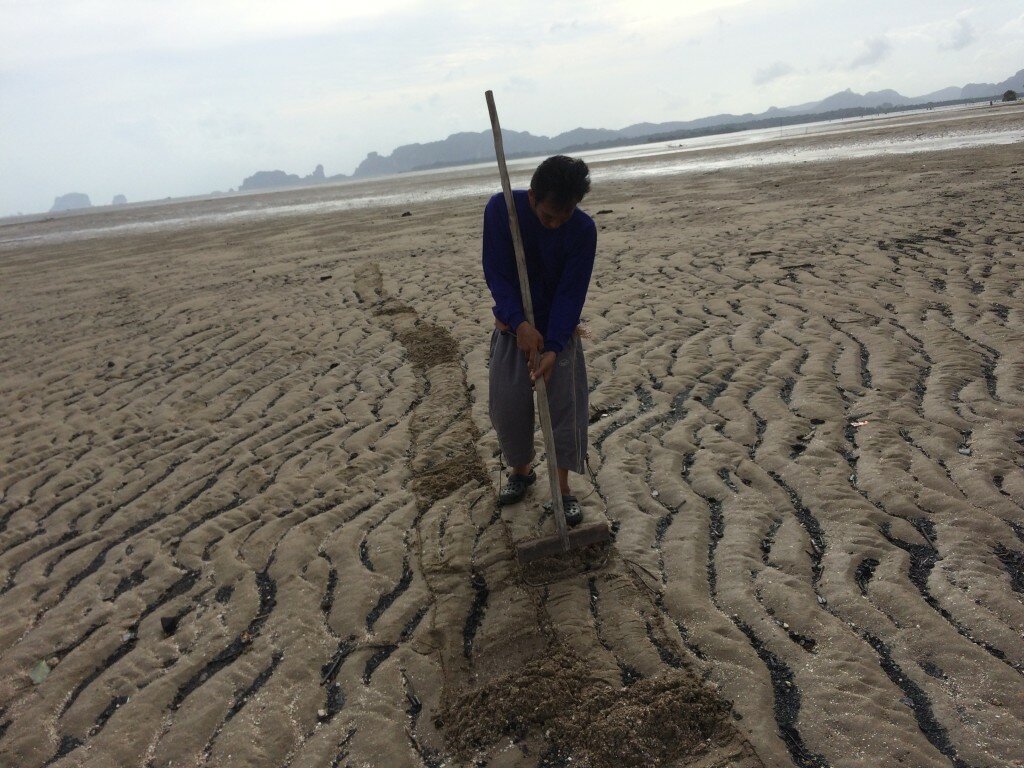 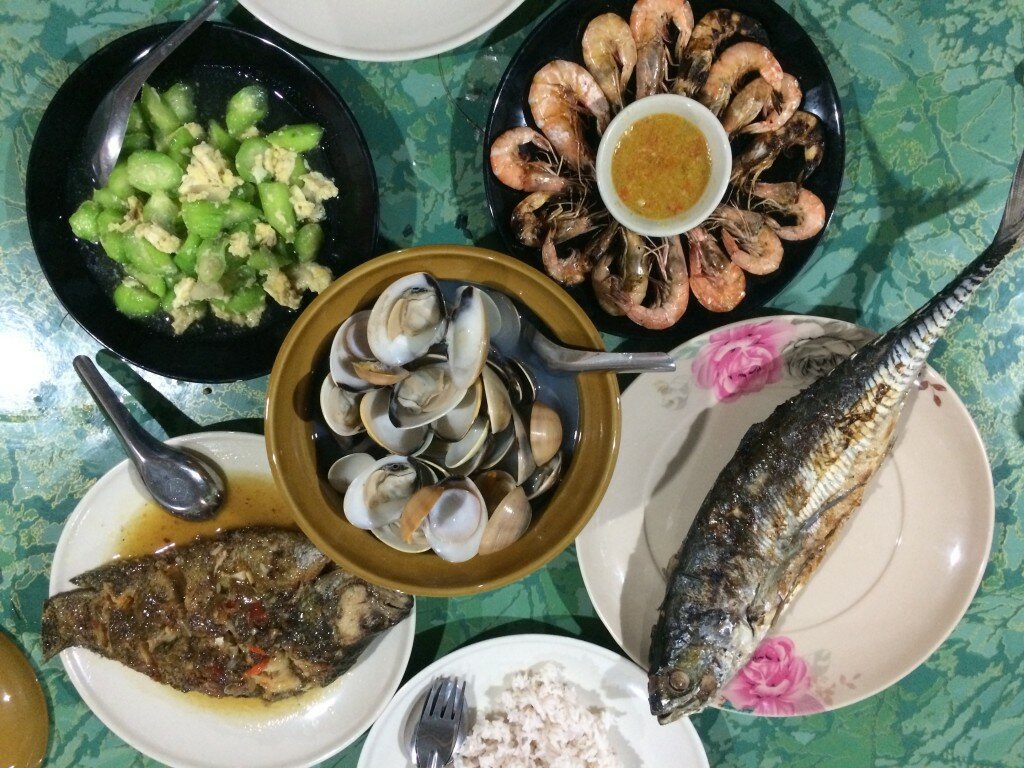 Here’s a family that worships a religion that Trump and many Republicans seek to vilify. 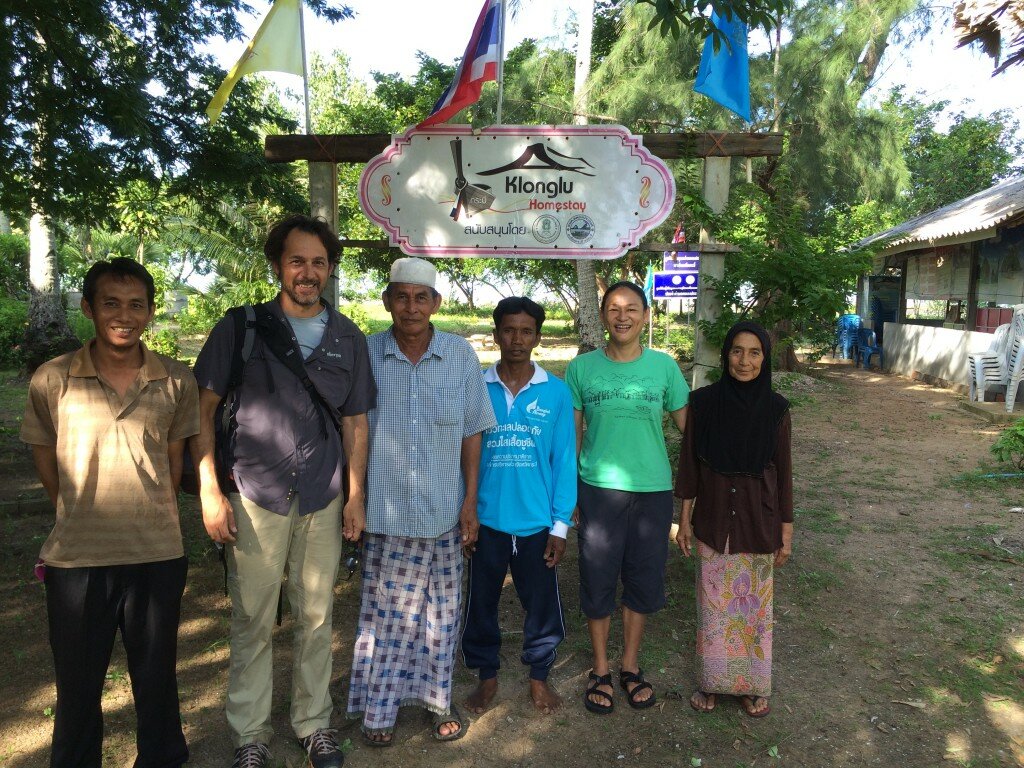 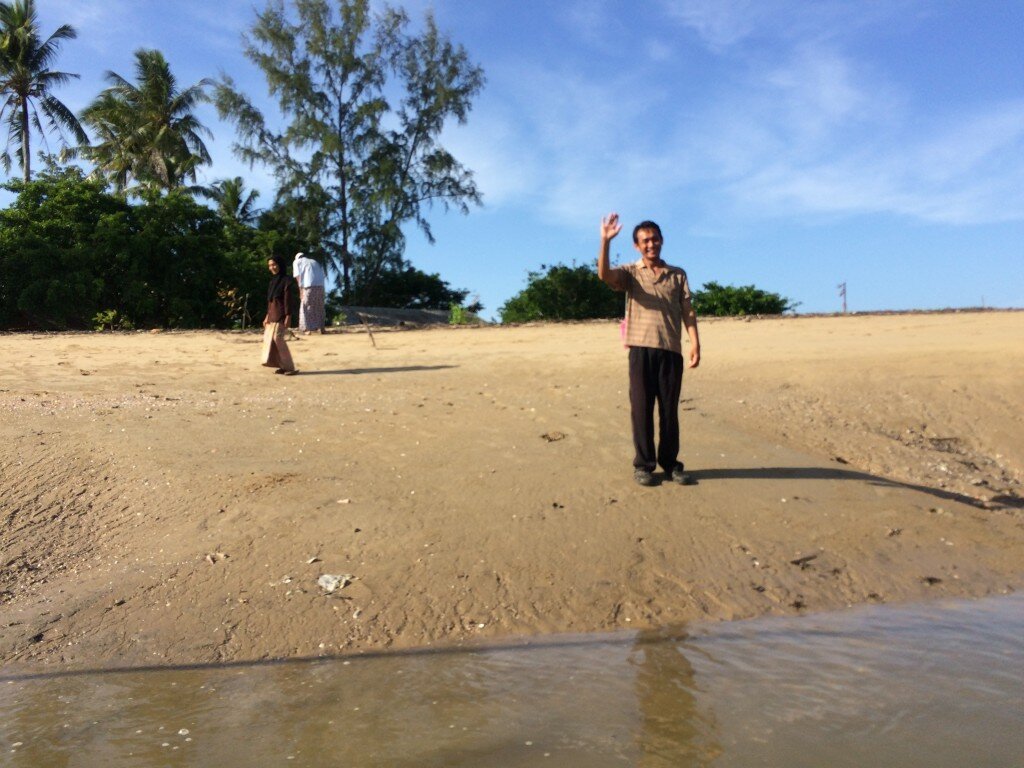 (Note that toddlers in the US kill as many people as Muslim terrorists.)

I don’t like Salt Lake City. Sorry to be so blunt (and honest), but nowhere I’ve been has left me feeling so uncomfortable than my first visit of the Utah capital. (Maybe it’s that to have a beer in a microbrewery you have to order a salad, where the barkeep picks lettuce out of a plastic bag for you?)

There are no signs leading from Idaho’s interstates to Minidoka National Historic Site. You have to know it’s there, the concentration camp (later called “internment camps”) where thousands of Japanese Americans were evacuated to during WWII. 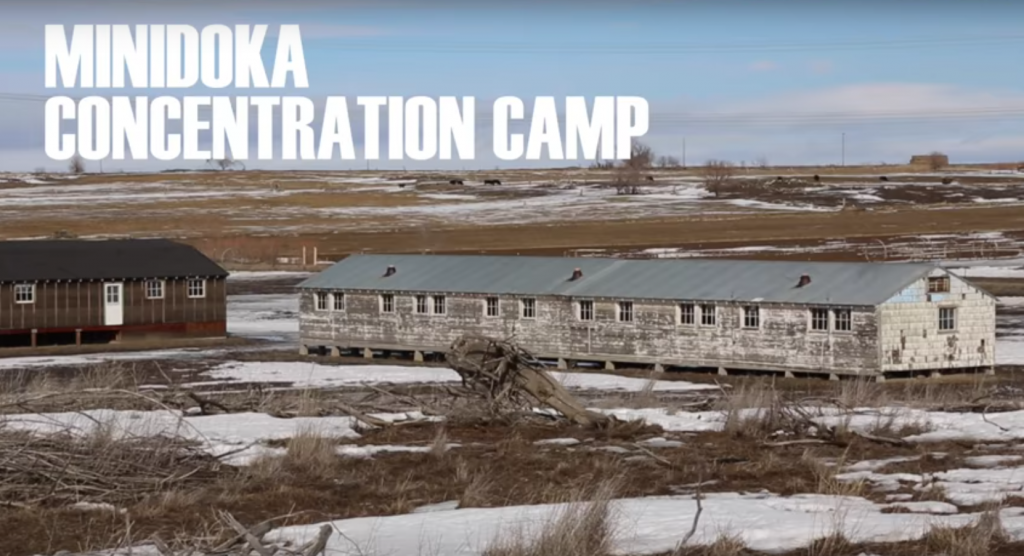 I broke myths in Massachusetts. In Salem, Massachusetts, apparently no one accused of being a witch was burned at the stake. Many were hanged though. And one guy was “pressed to death.” Which is just rude.

By the way, the Pilgrims — who didn’t wear buckled hats – didn’t celebrate Christmas. It was one of the reasons WHY they left Europe.

Also, Paul Revere never finished his famous ride. He got caught by redcoat soldiers, roughed up, lost his horse, then went to a bar and drank. Another guy DID finish that ride that night. Ever heard of Samuel Prescott? This young doctor who — unlike Revere — fought in the Revolution, got caught, then died in a POW camp. No one knows his name because Longfellow is not related to him. Instead, Longfellow — related by marriage to Revere – wrote an ode to Revere 75 years after that midnight ride, as propaganda to rally support for the Civil War.

I say all this because when so many people want to return to a “great America,” one must acknowledge how many myths help create that image. There are many many more than these three. 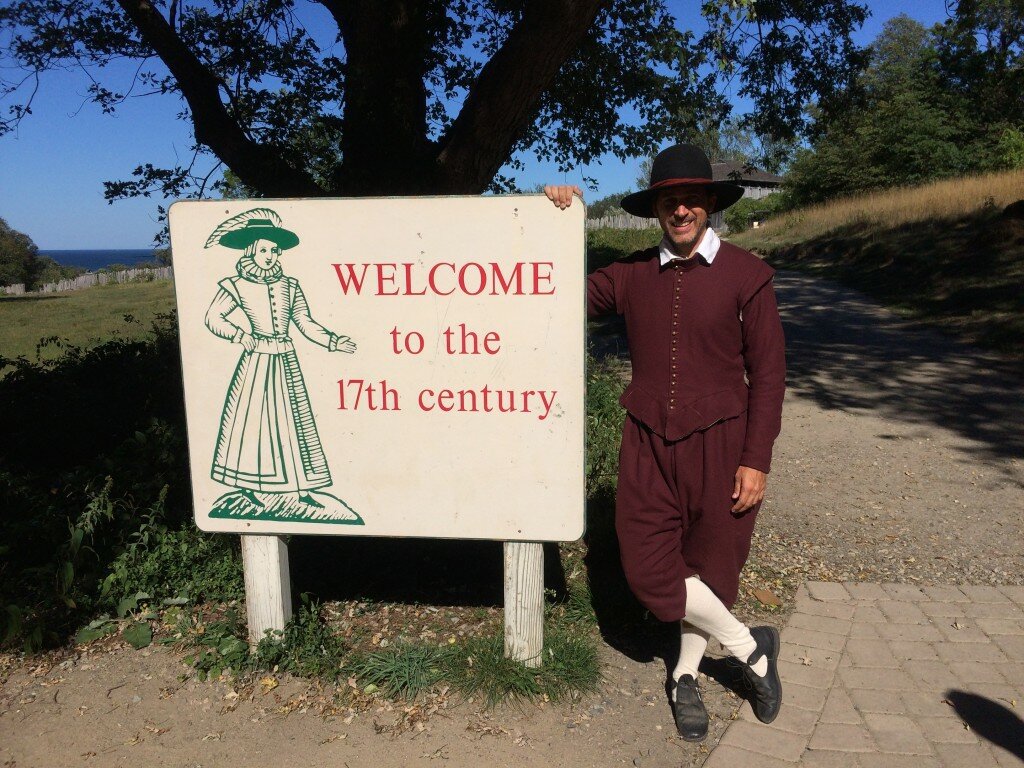 The Yukon no longer calls itself “the Yukon” because Saskatchewan isn’t “the Saskatchewan.” And so, Yukon leaders didn’t want to offend fellow provinces by keeping it. I’m sorry, but this is the most Canadian thing I’ve ever heard, which — by saying so — is about the most American thing you’ll ever hear. But still! “The Yukon” is one of those rare places where the differentiating article “the” helps it stand out (see The Bronx, The Yucatan, The Grand Chaco!). The Yukon should CELEBRATE this.

Also, the Yukon — like an Alaska without the crowds – has lost 22% of its glacial cover due to climate change in the last 50 years. Sorry Republicans, but science is real. And it matters. The Yukon knows this well. 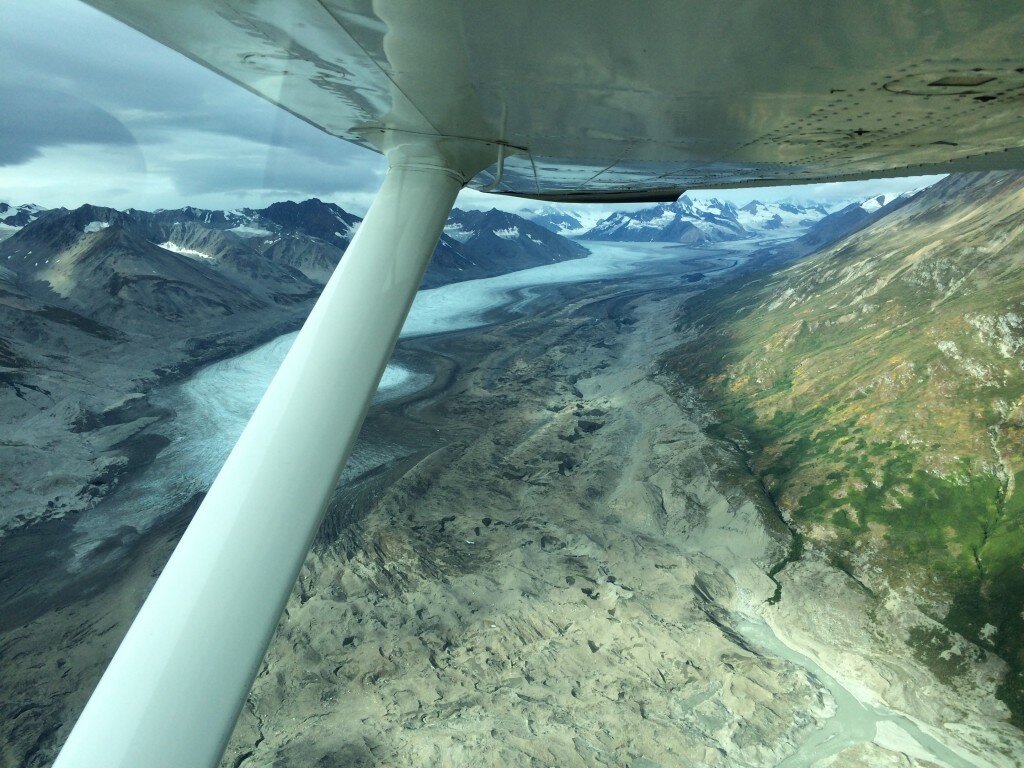 Thomas Jefferson had his slaves whipped. If one of his slaves tried to run away, he had them whipped in front of the rest of his slaves, then “sold South” — where conditions were worse. The national park guides at Monticello said this on the “slave tour.”

Incidentally, his epitaph lists his three great achievements, by Jefferson’s own estimation: writing the Declaration of Independence, building the University of Virginia, and that whole pesky “separation of church and state” thing that Republicans try to ignore so much.

In other words, I learned that ensuring religious freedom meant more to Jefferson than being president. 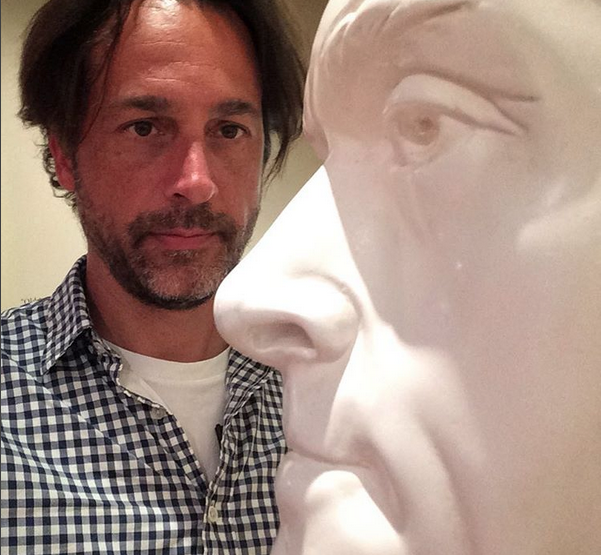 The Statue of Liberty faces Europe. I guess I knew this, but it came to light while working on a series of videos for a National Geographic textbook on US history (one of the most important, rewarding projects of my career). Much of the video subjects centered on a history that didn’t quite make my history curriculum in Oklahoma public schools. For example, I never learned any world history or any US history after WWII. No civil rights, no Martin Luther King Jr, no Watergate, no Vietnam. Also nothing on suffragettes, Wounded Knee or — tellingly — the Tulsa Race Riot.

(This is a Statue of Liberty in Tulsa.) 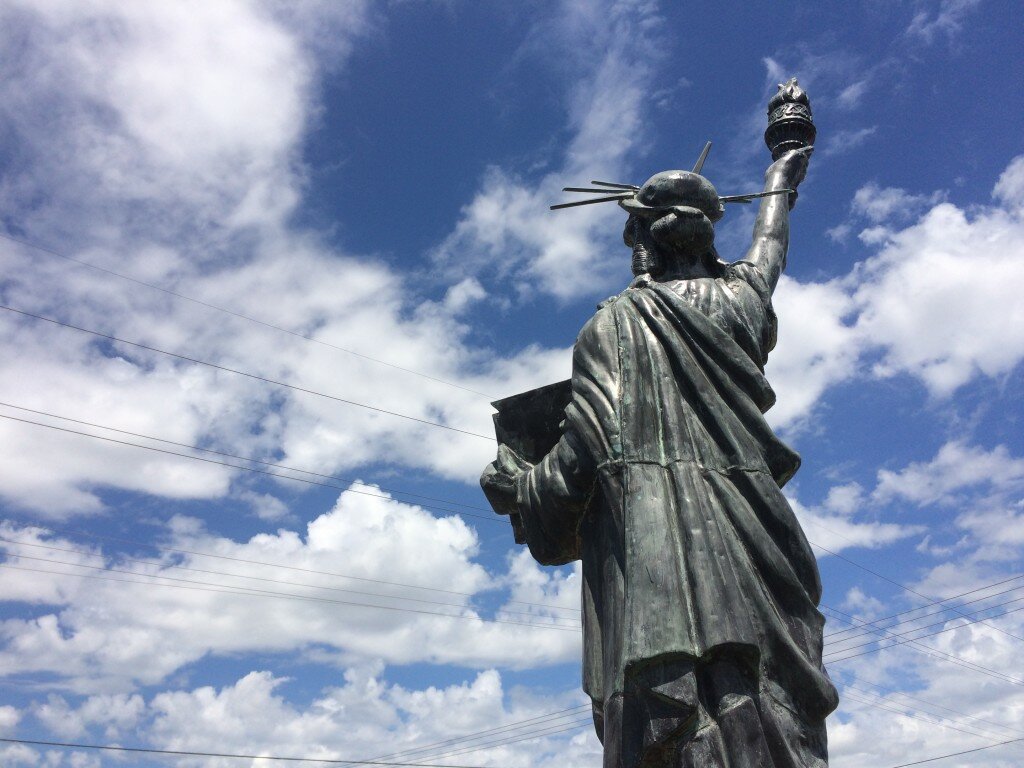 The Statue of Liberty faces France. But a different tale is found at Angel Island in San Francisco Bay, which happens to “face” Asia.  In 1882, the US Congress and president Chester Arthur signed the racist Chinese Exclusion Act. This came after Chinese laborers built the trans-continental railroad, and dug gold mines in California. Afterwards, no more “huddled masses” from China were welcome, even as that famous poem was written for the pedestal in New York. This act persisted, in various forms, for decades.

Today at the “Ellis Island of the West,” you can visit the detainment cells where Chinese waiting months for entry (or being shipped back). In some they carved hidden poems of hope. Impressively, rangers suggest to visitors to read news on immigration today and think of the story here a century ago.

Like I said, the US does NOT root for underdogs. 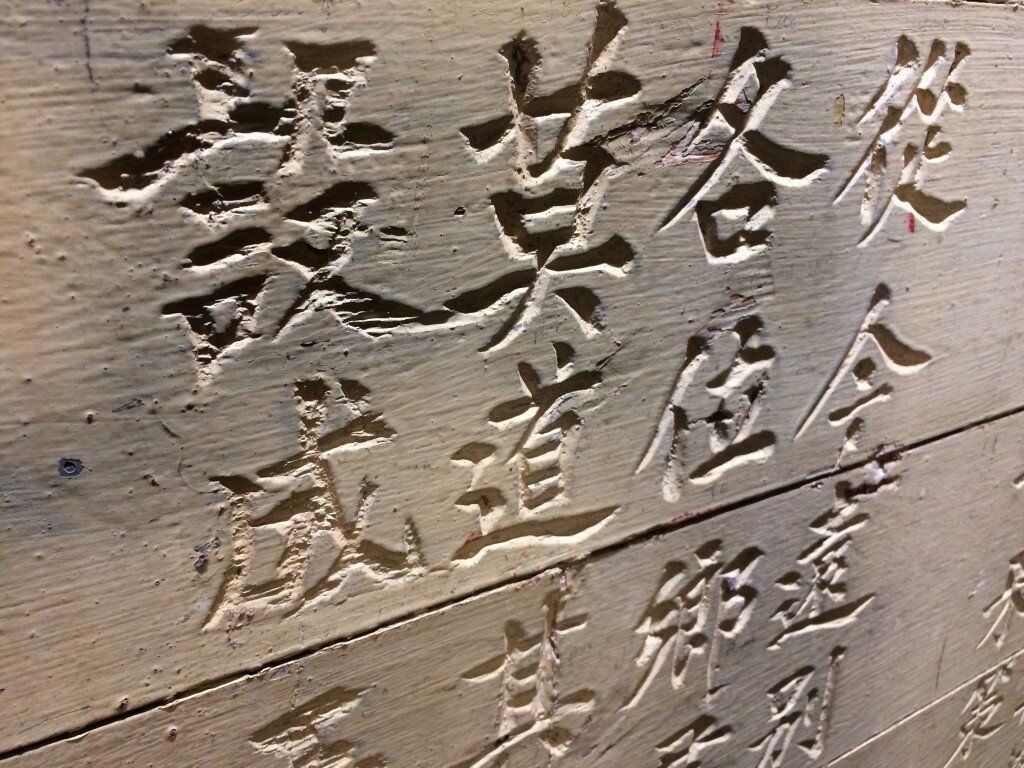 Cubans are really nice. The US scorned this poor Caribbean nation 90 miles from Florida for over half a century. The people now suffer food shortages. A person on the street in Havana asked me not for money, but MILK. I was there a week after Fidel Castro died. No one talked about him. I saw no weeping. I know it’s fashionable for some Americans to justify our long-standing, crippling embargo based on Castro’s civil rights abuses. But too often that only hurts the people. I hope we continue to mend our relationship with one of our closest neighbors.

As Esquire wrote last year, it’s not Cuba opening up, but the USA opening up. At last. 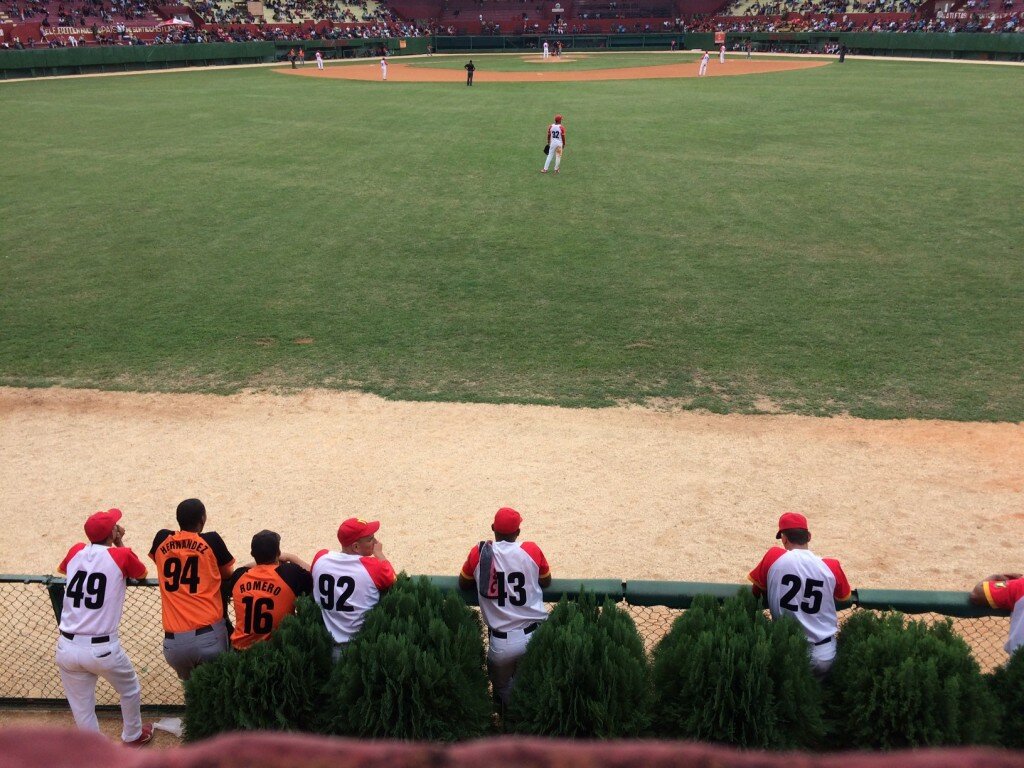 Louis Armstrong’s memoir is great. While researching jazz’s roots in New Orleans, I picked up Satchmo’s memoirs of his rough childhood, and how he casually documents racism. That he didn’t wear shoes on the streets is just the start of it.

Meanwhile, here’s a video on New Orleans jazz I made with my iPhone.

The only presidential sign in Oklahoma I saw after November 8 was for Joan Jett. It’s on a barn outside Elk City. I wish more people had seen it. Meanwhile, I wonder how many Trump voters will be hiding whom they voted for a year from now? The signs are already disappearing.

This has been some of what I learned from travel, research and talking with people in 2016. Here’s to a better year in 2017. 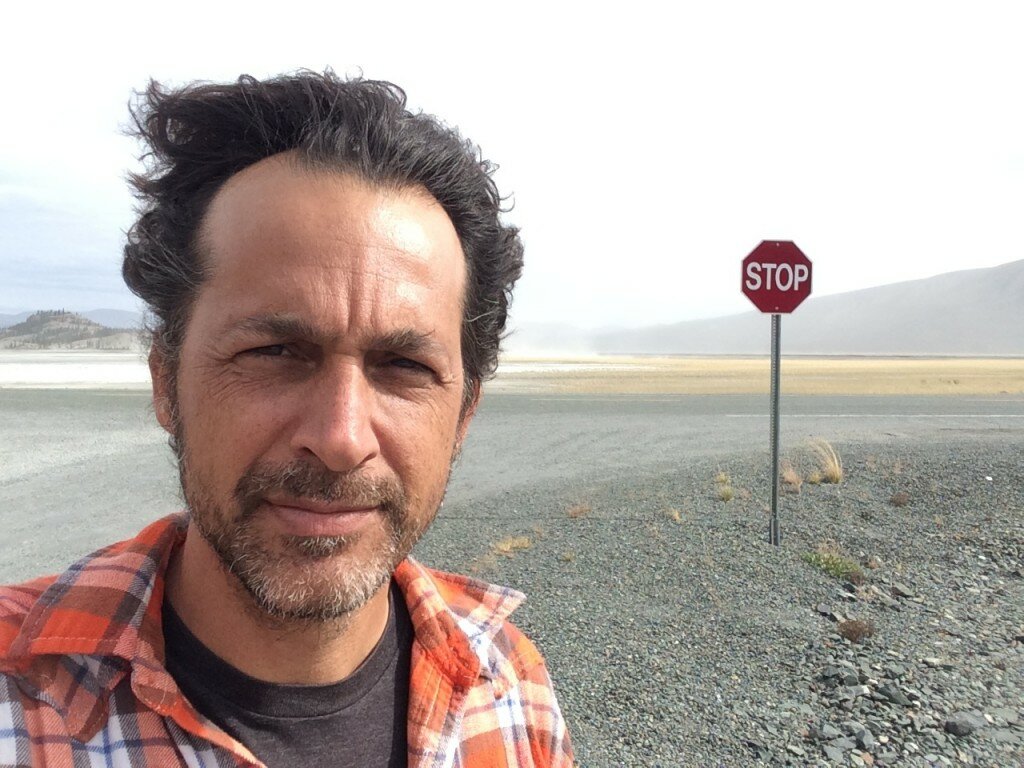 13 Responses to What I learned from my 2016 travels