Woody Guthrie’s got a home in Tulsa 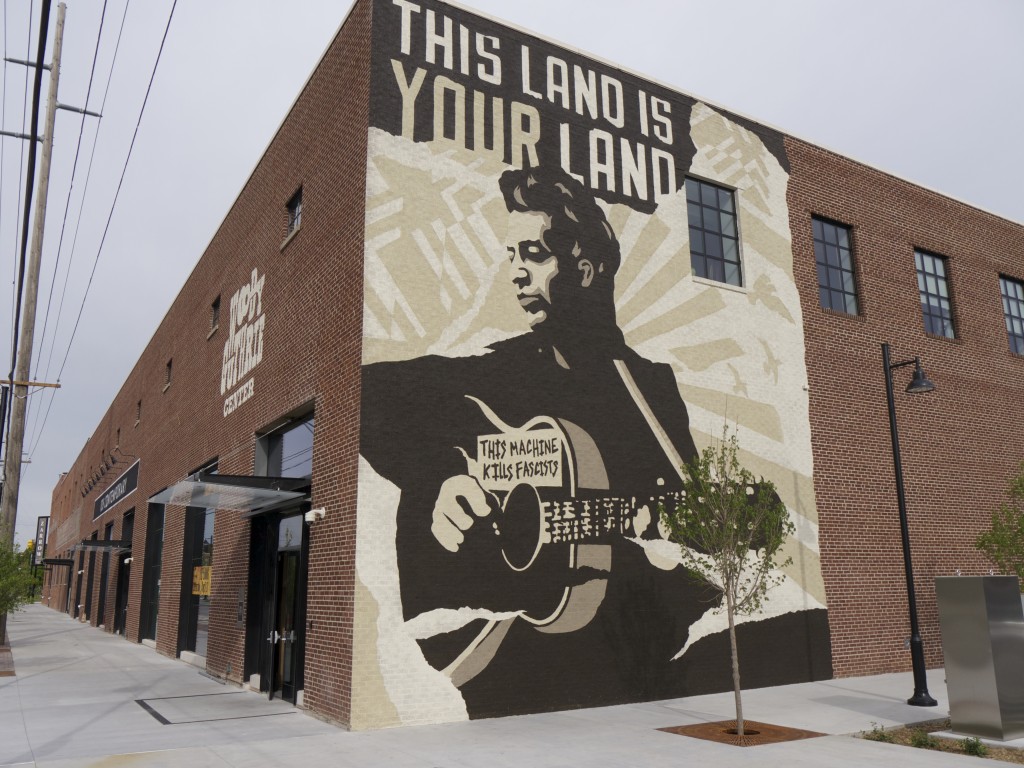 Everyone knows who Woody Guthrie was, right? Folk singer who sang about the Dust Bowl, the Columbia River and killing fascists? He grew up in Oklahoma, but the author of “This Land is Your Land” was the eternal rambler — and not just because he wrote “I Ain’t Got No Home In this Home Anymore”. But now he has a permanent home, in my hometown Tulsa.

Today my article on Gadling discusses how the new Woody Guthrie Center in Tulsa is anchoring a revival of the Brady District north of downtown. Meanwhile, here are some photos from recent visit back. 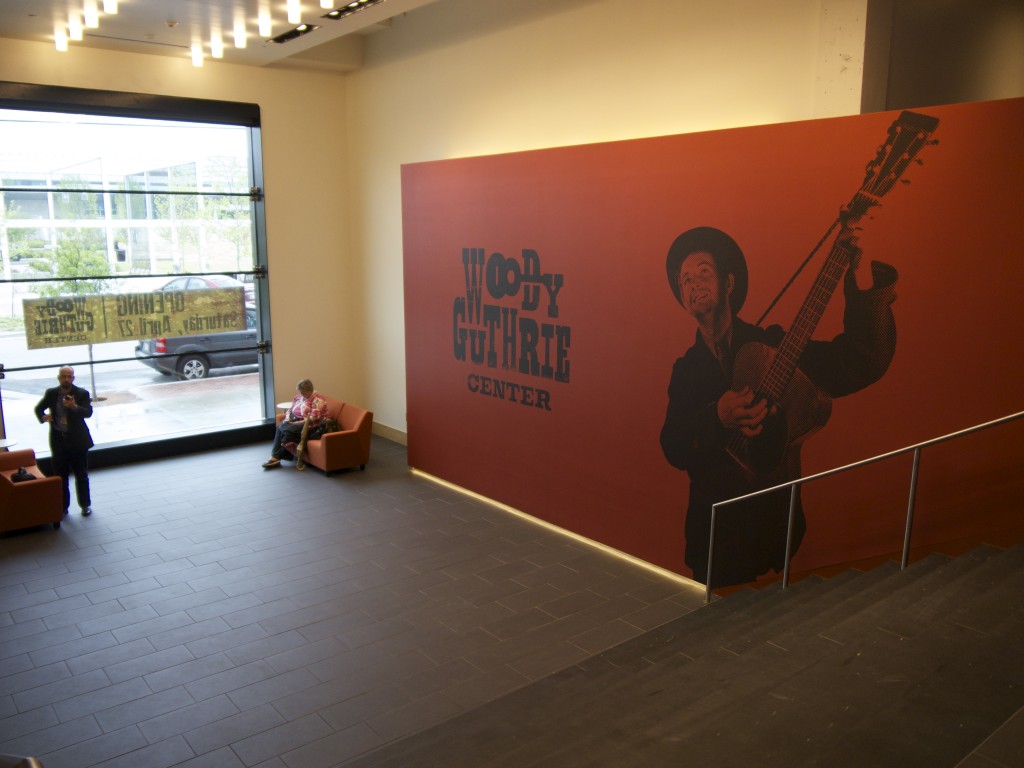 Up till now, the “archives” have been difficult to access if you weren’t a scholar. Before the center opened earlier this month, the only Woody stuff you could find in Tulsa was a grab-bag of old articles tucked away in a “vertical folder” at the Tulsa Public Library downtown. 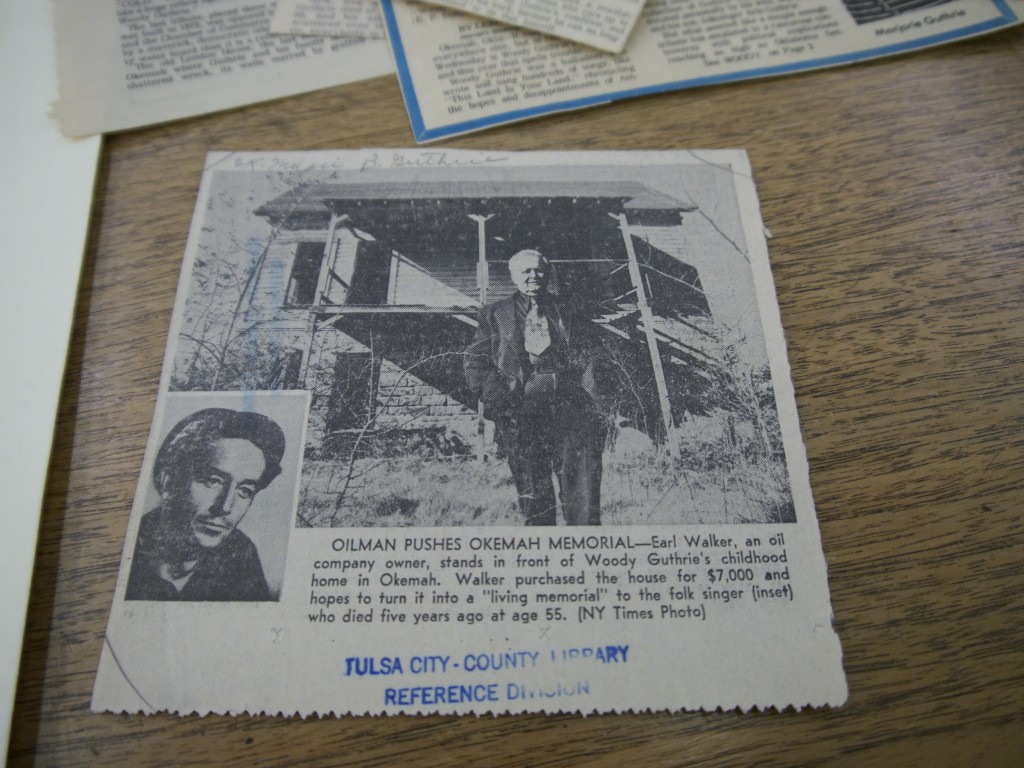 The new museum is a bit more “robust.” 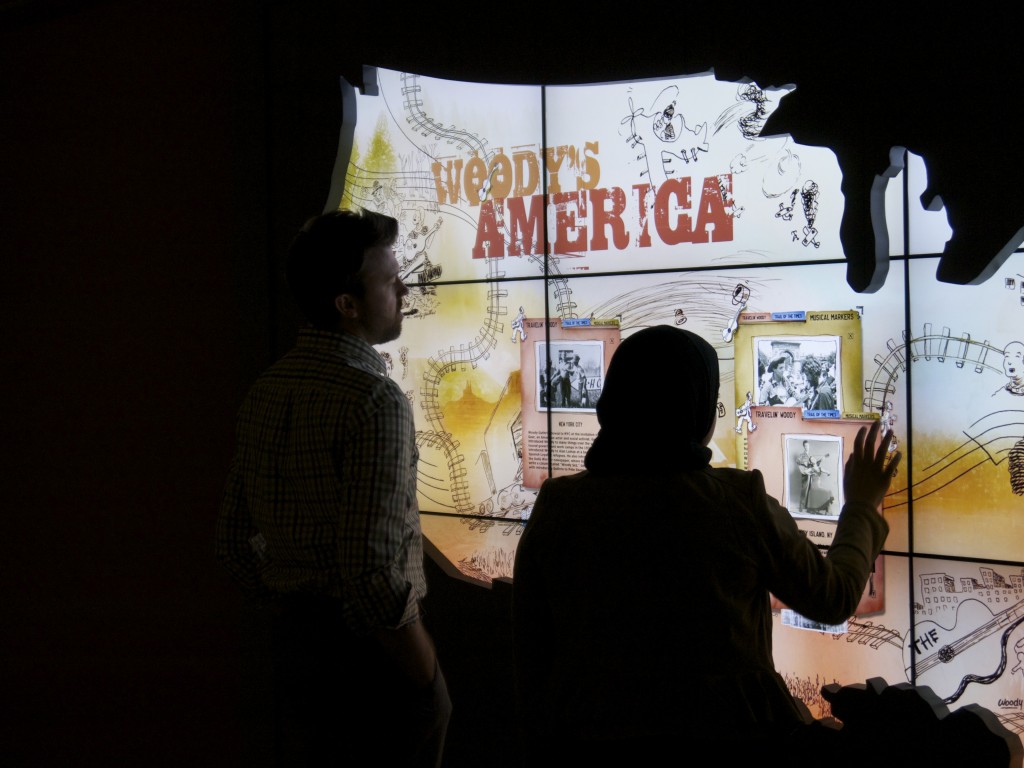 You can see Woody had some stylish handwriting: 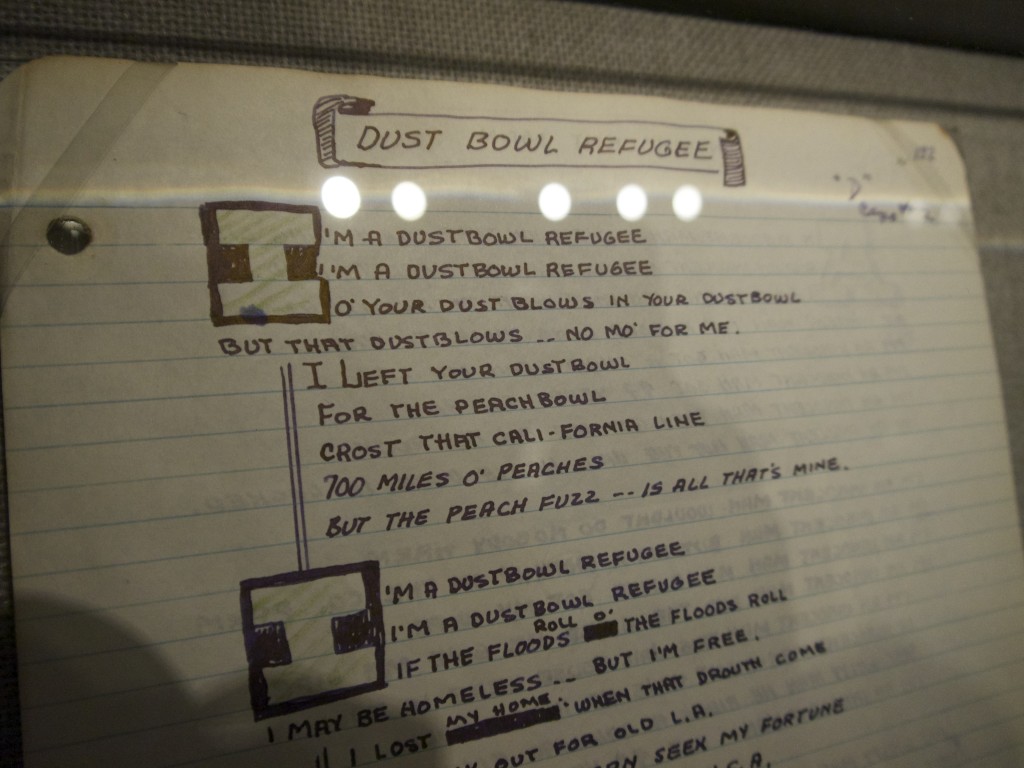 Woody has often been considered a “communist,” largely because he wrote for a socialist paper and hung around commies like Pete Seeger. Woody was more independent, much to the frustration of folks in the movement, but Woody signed up for WWII and put “this machine kills fascists” on his guitars, and even a variation on this fiddle. 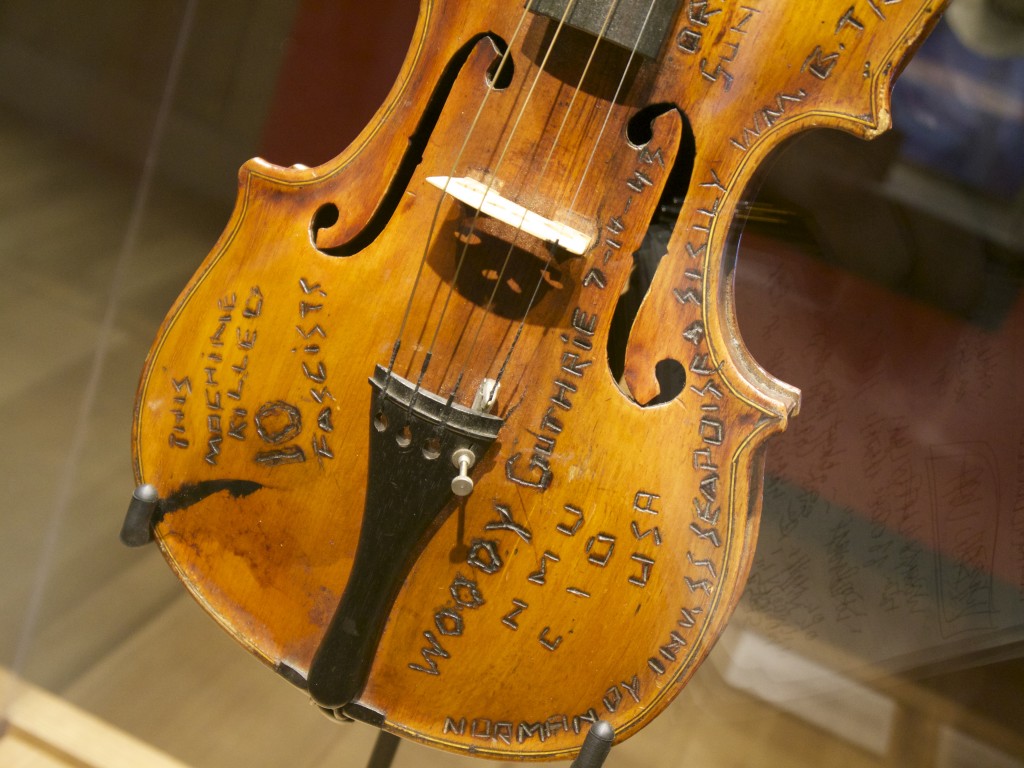 Woody’s daughter Nora, who was born in Brooklyn (and looks a lot like Woody), said she harbors no ill will that Woody’s birth town Okemah snubbed the families offers in the ’70s to house some archives in the Okemah library. “They’re so old now. It’s boring.” 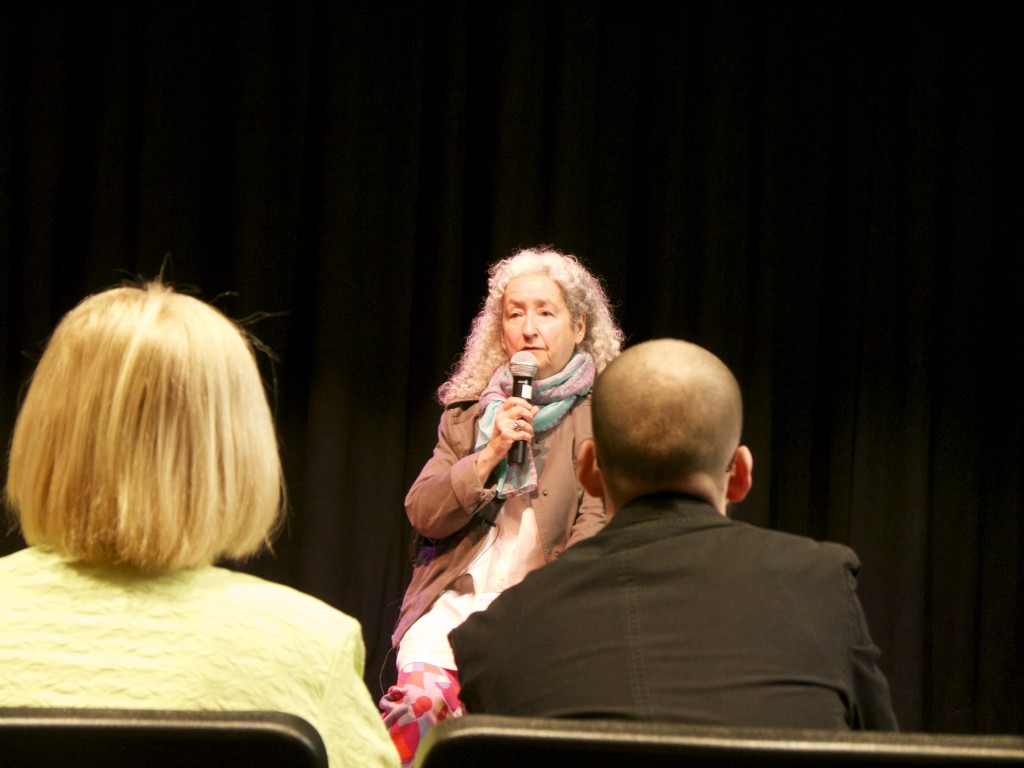 A centerpiece of the museum is “This Land is Your Land,” which Woody wrote in 1943 as a rebuttal to the glossy version that “God Bless America” gave of the country. A video panel shows many renditions. My favorite is a ’60s country version with a bouncy Glen Campbell singing in a fanciful green kerchief. (I rarely like his miserable pal too.)

Woody’s known, by some, for his goofy comic drawings, but he could oil it up too. Here’s his Lincoln. 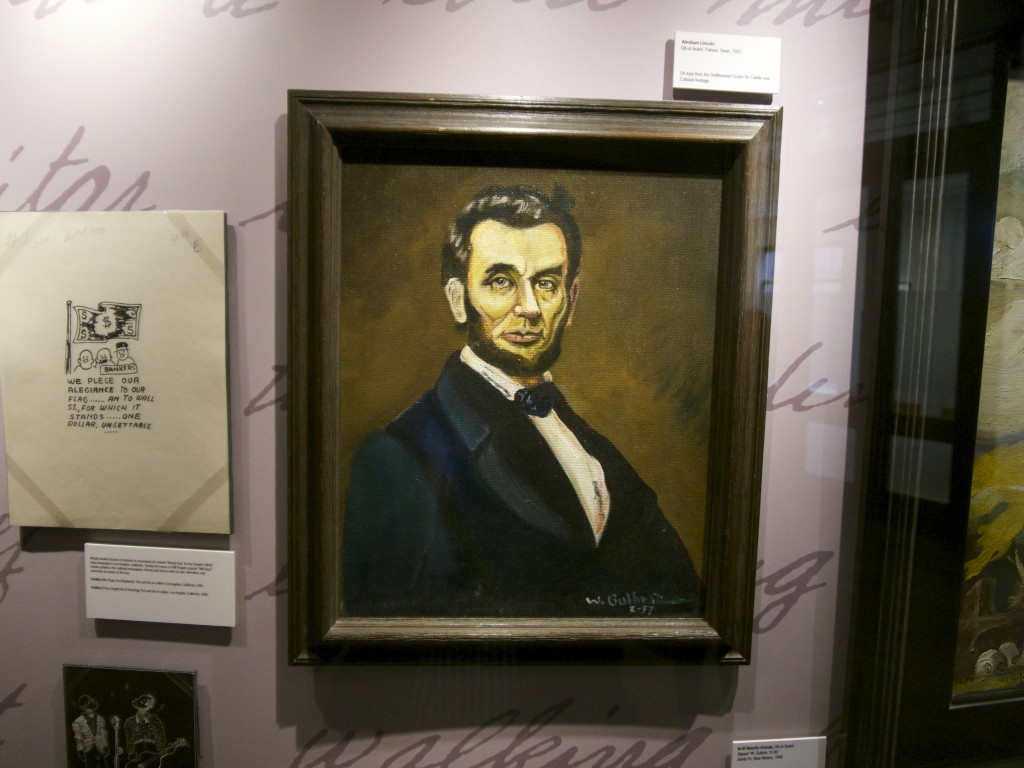 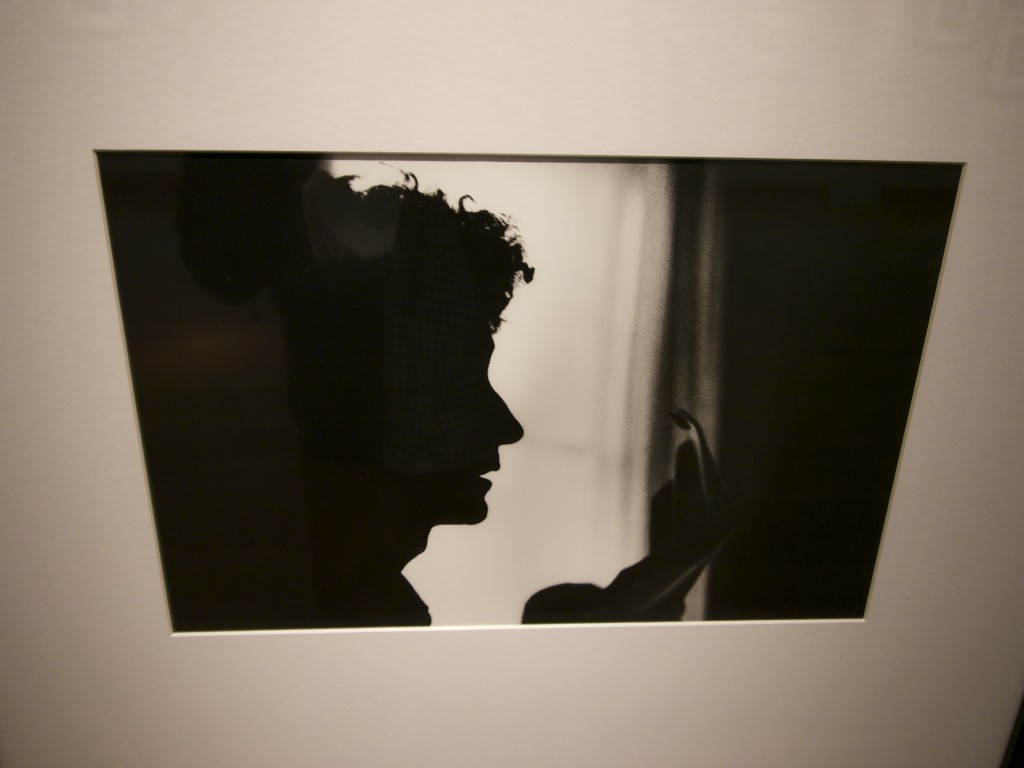 John Cohen, also on hand at the recent opening, told me he once told Kerouac how much Woody’s writing reminded him of Kerouac’s and the beats, and Kerouac snapped back, “Woody Guthrie? He was just a folk singer. I’m a poet.” Right. 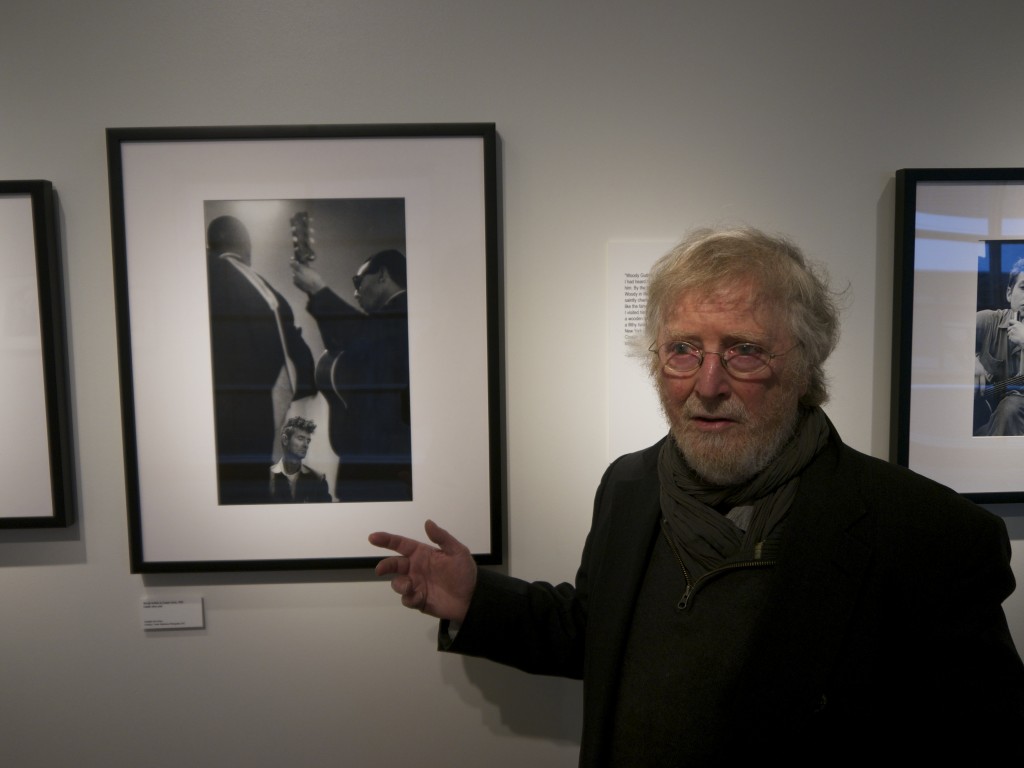 Woody’s not the only musician around the Brady. “3CG” is the studio of brothers Hanson, who hail from Tulsa. Word on the street is split. Half say they’re cool, others that they “tip like sh*t.” Apparently Isaac’s definitely the coolest. I managed to spot a fourth Hanson brother, not in the original trio, going into 3CG. Point for me. 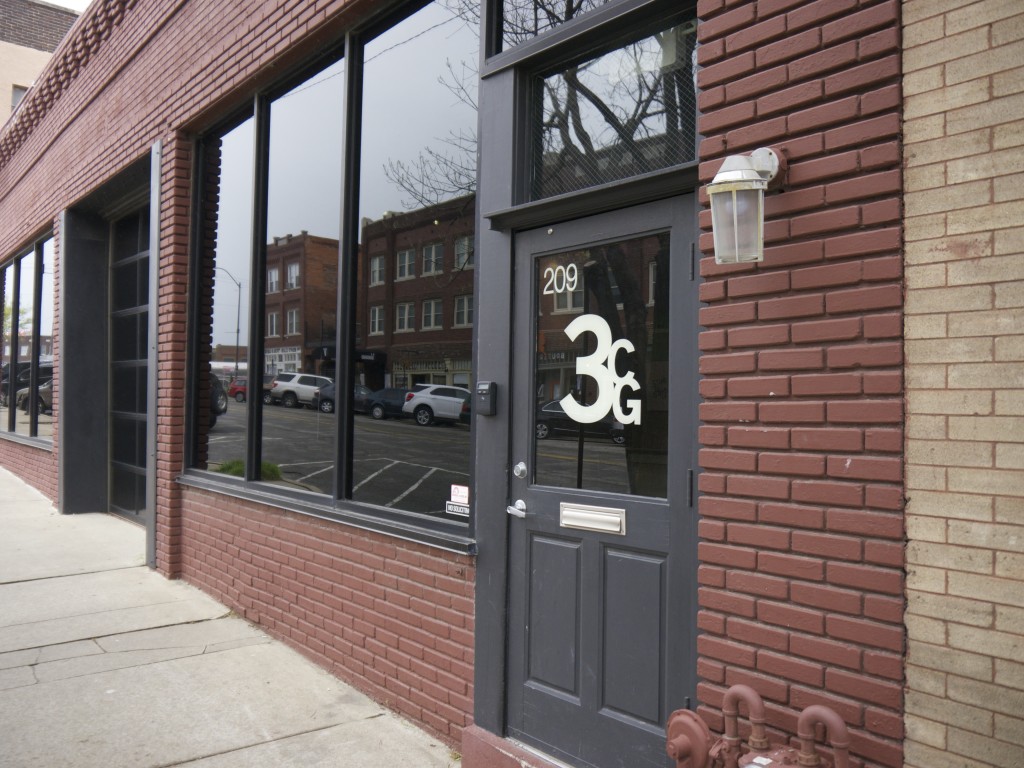 My first time in the Brady, back in the summer of ’83, was when Alfie Mizer needed company for some concert at the “Old Lady in Brady.” And he offered a free ticket to see some band from Ireland called U2. Both Alfie and I defiantly wore recently procured Ozzy Osbourne shirts, 3/4 sleeves with Ozzy holding his decapitated and bleeding head. By the time Bono crowd-surfed past us, Alfie has ripped his down the middle, symbolically killing heavy metal years before Nirvana hit a distortion pedal. 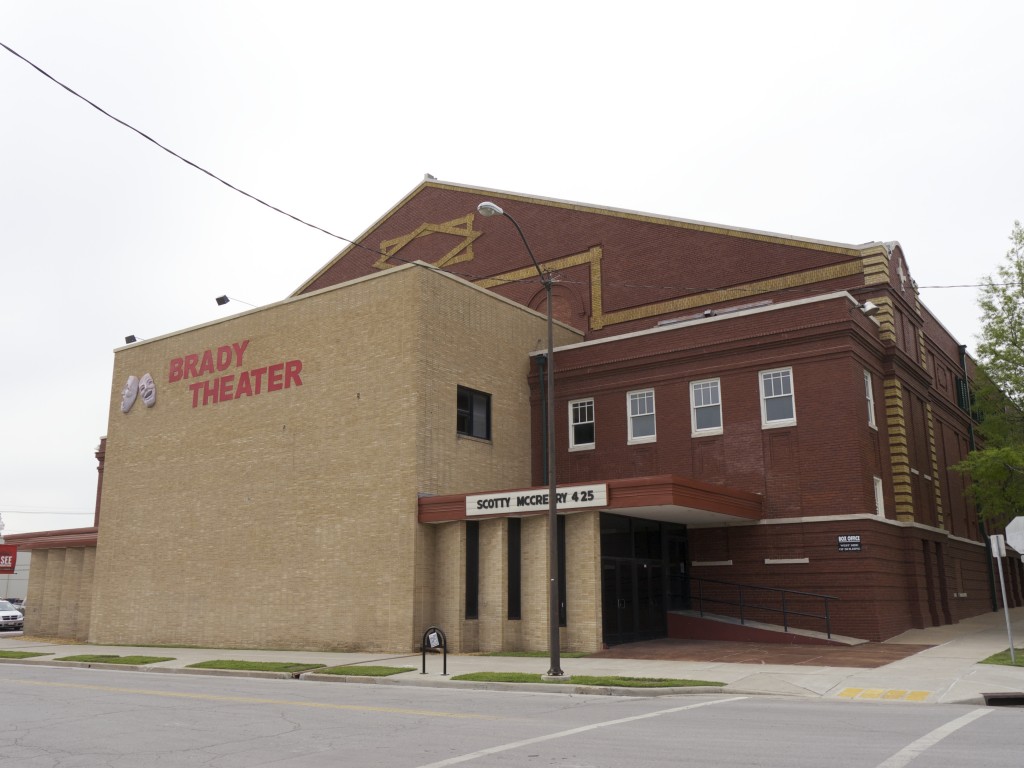 After the U2 show ended, Alfie and I walked through the dark streets to meet my mom in downtown for a ride home. I remember on the bridge here, over the tracks, talking about how “U2 will be huge. They’re the next Stones.” And we, on that hot Oklahoma night, we’re right. It is a very different Brady District these days (violin shops, glass-blowing classes, falafel!). Plus, now it’s actually a “district”! 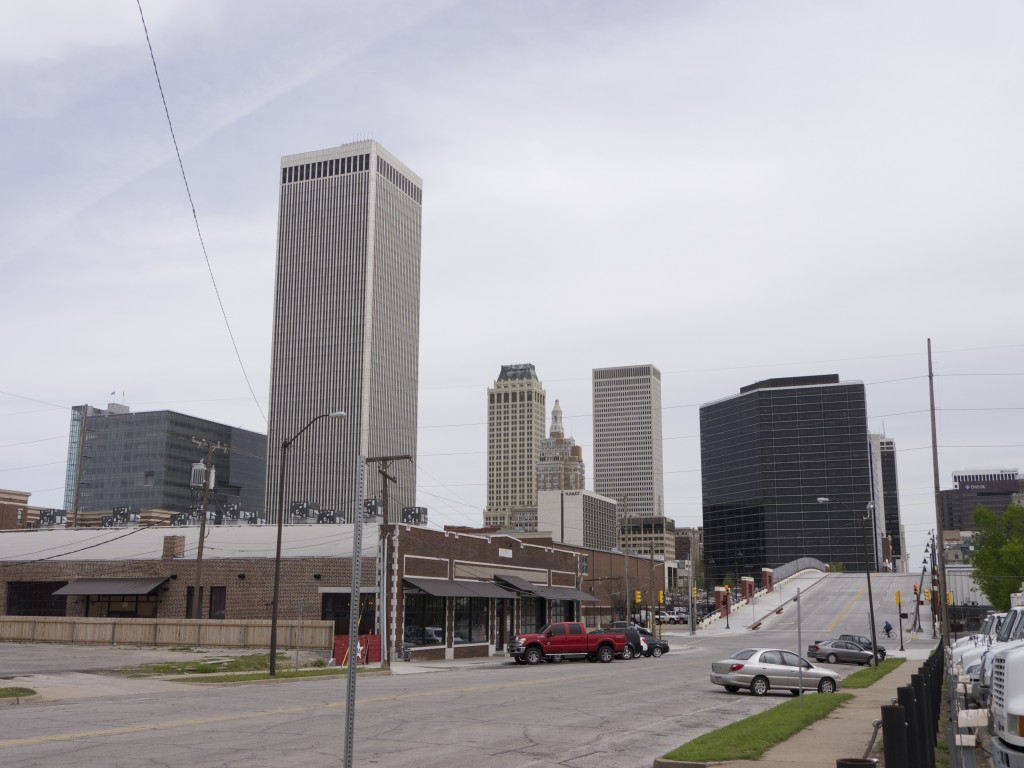 The most famous venue in Oklahoma has always been active in the Brady. Cain’s Ballroom is where Bob Wills perfected “Western Swing.” Also the Sex Pistols played their second-to-last show here. (The kids waiting here for an AWOLNATION show hadn’t heard of Bob Wills by the way.) 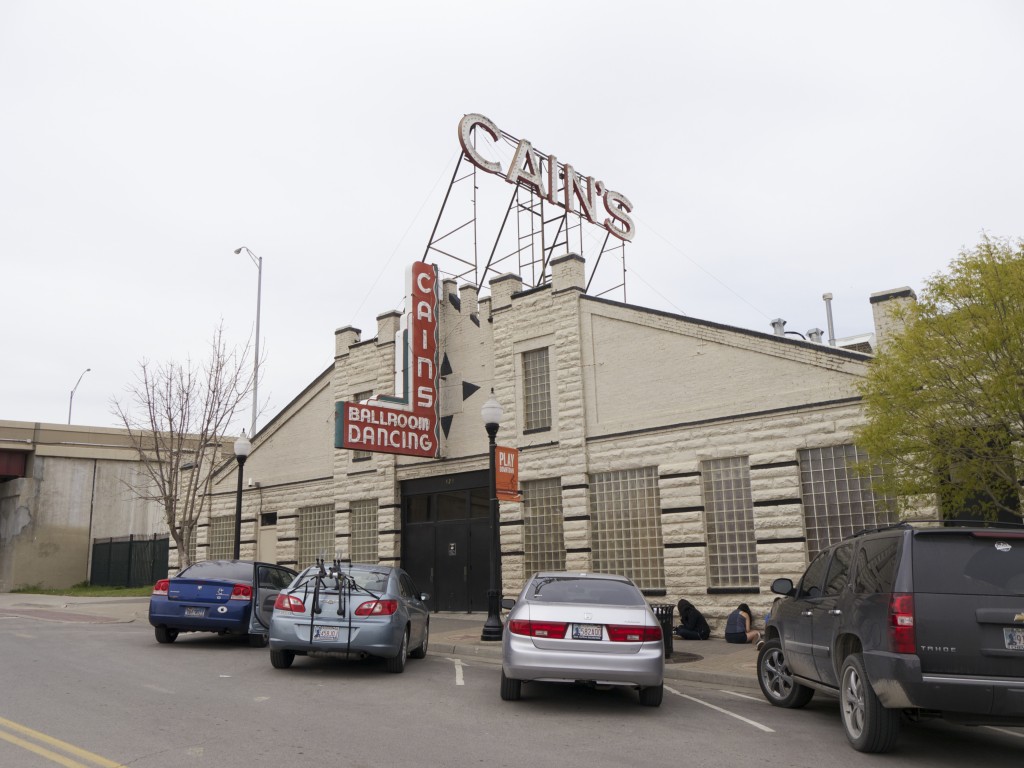 The local walk of fame snubs the Pistols, though a certain “Seth” got a DIY mention. 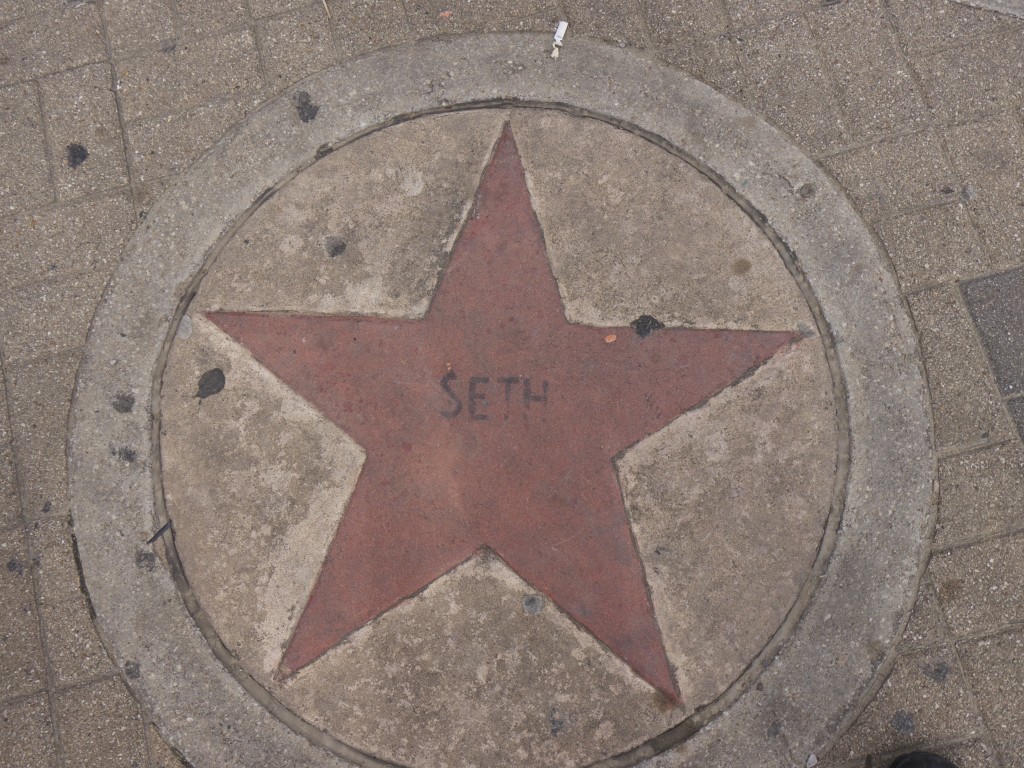 Woody wrote 3000 songs, recorded about 300. “The Pastures of Plenty” is a great one. Hear it in the following snippet  from Woody’s involvement in the Bonneville Power Administration documentary on the Columbia River. If you think about it, Woody was one of the first “sponsored bloggers.” Paid a couple hundred dollars to travel around Oregon and Washington and write songs to promote the efforts to bring, as Woody would say “E-lek-tris-i-tee” to struggling people.

“We come with the dust, and we go with the wind.”

4 Responses to Woody Guthrie’s got a home in Tulsa