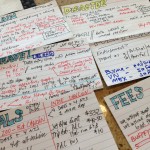 I enjoyed meeting travelers and writers (and drinking mezcal) at the NY Travel Fest last Saturday. I also had the pleasure to join Valarie D’Elia of Travel with Val fame, and Jason Clampet from Skift.com, with fancy Ted Talk mics, in a panel of Extreme Debate. Actually the fiercest moments came before the show, when we debated what topic to discuss. So we expanded it to a six-pack of debate topics.

Here’s my thoughts on a few of them.

Should you count countries?
I think it’s fine to count countries you’ve “been to,” but it should only be a “by the way” part of a conversation, like a factoid flashing across the screen. Not the headline. (And you do see some folks bragging of “racking up countries,” or dealing with the headaches to get an elusive one off the list — without a mention of what they found there.) I mean, Timothy B Sedgwick had a collection of 234 remarkable pencils, all fine hand-made jobs from Denmark; but he wrote terrible terrible poems*. Shakespeare had one pencil. Ie, yeah, you’ve been to heaps of countries, but I’d like to know what you “do” with them? Ie, what experiences do you have to say about it? Or is it all just Timothy B Sedgwick prose?

Are deals great, or duds?
“Deals” bore me, I’m sorry. I’ve used them, but never chased them. Nothing wrong with accepting a cut-rate airfare to a place you want to go to, and are planning to go to. I’d just hate to passively allow deals direct my holidays. Many end up false, or lead to less-than-atmospheric places. I looked up TravelZoo’s first Cancun deal as an example: a four-night stay at an all-conclusive resort on a faded stretch of the already crowded hotel zone and a flight for $1250 for two people. Or one could fly direct to Cancun ($335 each), arriving mid-day (as opposed to late), taking a $10 bus to Playa del Carmen, staying with Italian couple at two-room B&B a couple blocks from beach ($40 a night), and ferry to Cozumel for snorkeling or a DIY trip to the Mayan ruins at Chichen Itza. In all, it costs about the same. And with nearly a full day of sun extra. Mexico gets better than Playa, but Playa is a lot more laid-back and fun than Cancun.

Is it OK to complain when traveling?
There are two kinds of complaining: complaining and whining. Whining is because you don’t like how things are different on the road, and are essentially exporting your own routine and expecting where it’s the weird thing. Not good. Complaining — like when a kid is kicking you in the head, or a Hanoi tour operator doesn’t give what you paid for — is your right. But delicately. More so than when at home. You’re an ambassador, like it or not, when on the road.

When I was in India years ago, a man on a bus took my Walkman out of my hands without asking so he could play some tunes on it. He returned it, less precious battery life, a half hour later without a word. I was steaming mad. But didn’t say a word. Later that night, when temperatures dropped severely, and everyone on the bus pulled out packed blankets but me, he saw I was cold and immediately shared his blanket with me. Again without a word. Ah. Possession is a different ballgame there. Good thing I kept my mouth shut.

* Timothy B Sedgwick, to the best of my knowledge, did not exist.

7 Responses to Thoughts on my debate at NY Travel Fest!! (warning: SUPER-CHARGED content)