44 fun things I did with Lonely Planet 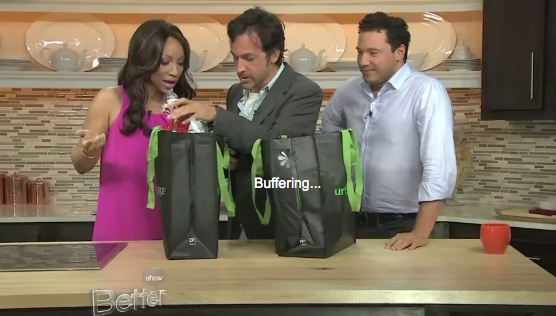 I like Lonely Planet a lot. I think any travel publisher that believes everywhere is a worthy destination — Costa Rica, Scotland, Oman, Dallas — should get some sort of special Pulitzer for simply existing. I really do.

Fifteen years ago, I packed my car and moved from New York to San Francisco to see if I could get a job at Lonely Planet. I probably could have sent a resume, but I didn’t feel there was any alternative. After a few months they called me in, and I’ve been with them ever since. I edited books, ran the Shoestring series, wrote a couple dozen guidebooks, created the “76-Second Travel Show,” and waved the LP banner while doing things like shaking Al Roker’s hand. It’s been a dream, really.

Today’s my last day at LP. A month or so ago, I’ve decided to leave to pursue my own writing and see if I have a book in me.

But first, I want to share 44 fun things I got to do because of LP’s vision, support and gumption. (Or looking the other way after saying “Robert, this is not travel.”) Together they stand as my 44 thank yous to the champs of travel; 44 of a nearly endless list.

1 – On Canada Day when I was nine, my gerbil Steve bit my finger and I fainted. We were just about to fly to Calgary, and I remember thinking “none of this will matter if I get a Mountie hat.” I never did. But then, I did. With LP,  I trained as a Mountie. Got a regulation moustache, then got thrown into a car by my crotch, threw another cadet into a car by his crotch, then I was hog-tied. Sometimes it’s easier to just go to the museum shop for Mountie gear.

2 – I hung out with Potter Pilgrims at the opening of the Wizarding World of Harry Potter at Orlando’s Universal Studios. I’m not a Potter fan, but the utter joy of these folks was infectious. (The Butter Beer, less so.)

3 – I tricked TBEX into letting me assemble the “Live Research Crew” to demonstrate how 15 minutes could save a blog. 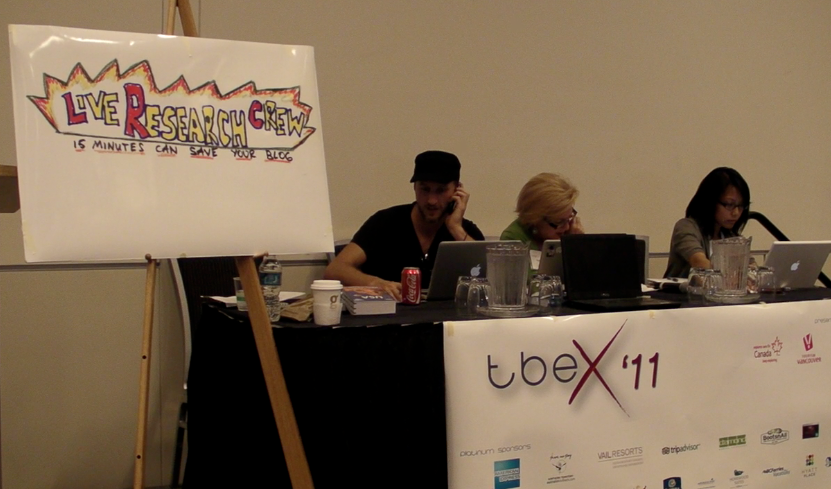 4 – Did you know the first breakfast cereal was invented by a bearded bohemian in Dansville, New York? Called “granula,” it was so hard it had to be soaked in milk OVERNIGHT  before you could eat it. I met some serious “cereal experts” on this roadtrip to Dansville. And had a local bowl.

5 – A Stalinist Yakut in a Far Eastern Russian town on permafrost hugged me, showed off her cute embroidered Stalin pillows, and gave me horse meat to eat. Then I saw throat singers imitate a horse. I also met some non-Stalinists: 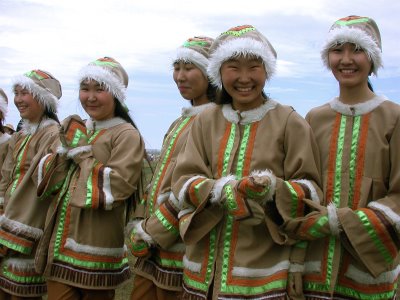 6 – LP granted me the chance to throw New York’s only 100th birthday party for the Manhattan Bridge on a very snowy December 31, 2009. For the program, I had to draw a Phil Collins after my computer crashed. 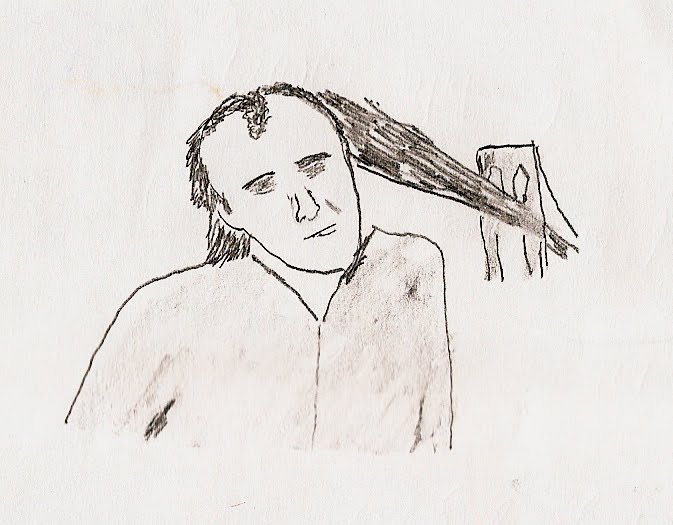 7 – Actually I got to draw all sorts of things. 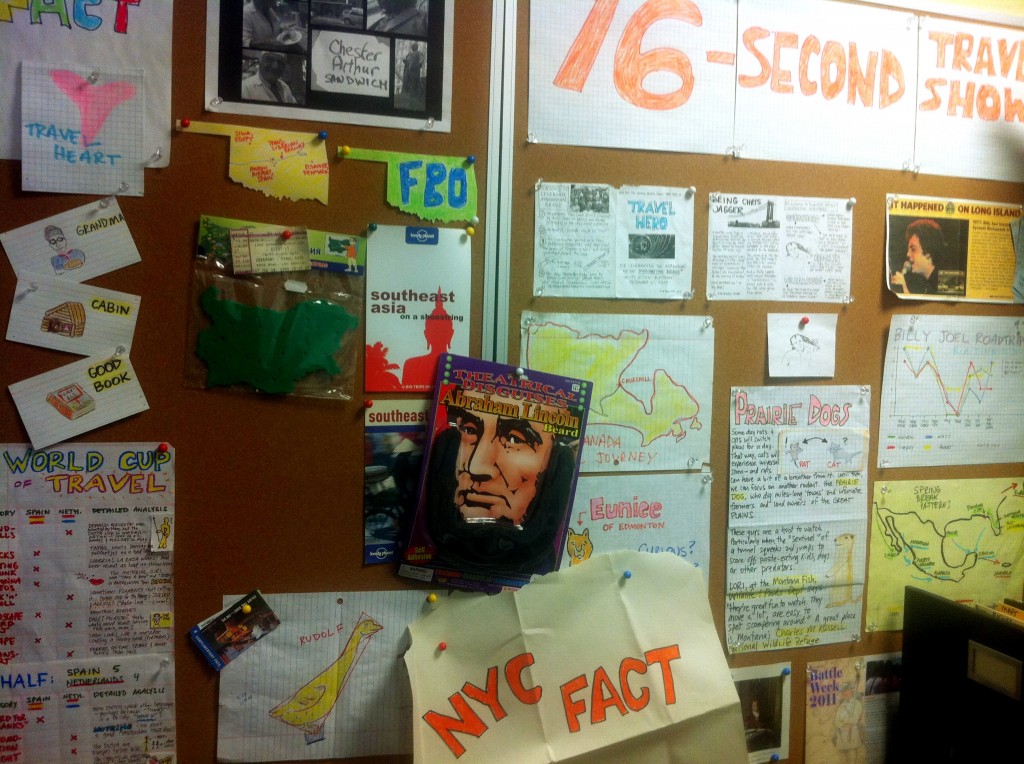 8 – Hoboes in a dry county in Mississippi gave me packing tips.

9 – I visited with Saskatoon bass makers, t-shirt makers, curling MCs and the mayor for lyric ideas for a “rap rhapsody” called “Sensation Sensation.” Local news played it for locals, one calling it “pretty catchy.” 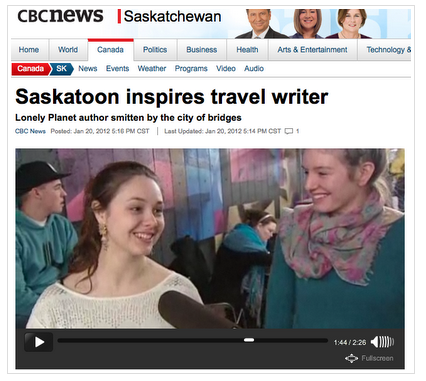 10 – I got to cover the Great Plains for the USA guidebook, the trip of my life. I learned to detour to short horizons in flatlands are often set above sweeping curves in the one-time prehistoric seafloor. I listened to Native American radio stations while driving South Dakota’s cute pink highways, made of quartzite. I lured my dad up to meet me at Mt Rushmore. And I found the most hilarious visitors center of all time, in the geographical center of this continent of ours.

11 – I flew with Iron Maiden’s Bruce Dickinson to Iceland. And learned his secret to jet lag while making this video: “ignore it.”

12 – I got to stage Le Festival du Bagel in Montreal. 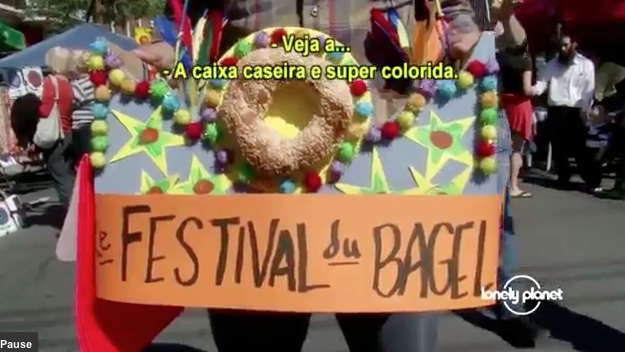 13 – I used Billy Joel’s lyrics as a guidebook to Long Island. The number for “Johnny A” is still on my phone, and I called by accident not long ago and hung up. I don’t recommend anyone does a thing like that to Johnny A.

14 – On a research trip for the Trans-Siberian Railway, I woke up one morning in Tynda, after a vomit-filled vodka night with suited locals in a SUV, to find hangover pellets in my pocket. Someone had put them there. No one tells you this, much less Sting in this tepid song from the ’80s, but Russians are absolute sweethearts.

15 – Picked up hitchhikers. A drunk Transylvanian who apparently had never been in a car, Turkish-Bulgarians in the Rodopis, and a Mexican grandma on a sandy coastal road my rental car wasn’t built for. 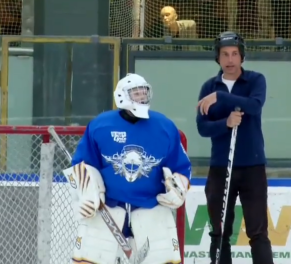 17 – While working in LP’s Oakland office, we’d break on Fridays for LP Soccer! Some of us LP Soccer! participants attended the eclectric 1999 Women’s World Cup Final in the Rose Bowl (the USA “beat” China, 0-0; oh soccer). And then Brandi Chastain did her thing. 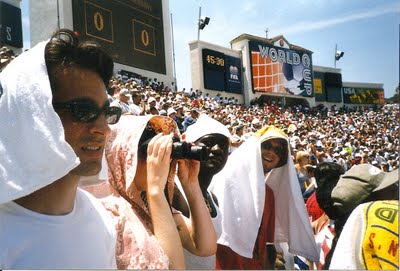 19 – Got to see a Harvard/Yale football game. I mean, a football ticket is the only way I could ever get into the Ivy League. Afterward I restaged the “how do you like them apples?” scene from Good Will Hunting outside the Cambridge location of Dunkin’ Donuts.

20 – Interviewed my mom about my first trip to Mexico City, back when I was six and everyone dressed like rock stars.

21 – Asked Gettysburg reenactors how they decide who dies first — and didn’t mind learning next to nothing.

23 – Staged a 0:13 reenactment of the James Garfield assassination. And made a Chester Arthur sandwich.

24 – Got to a few places Lonely Planet hadn’t been before. Like the non-essential Siberian town of Novy Urgal and Burma’s brand new, bizarre capital, Nay Pyi Daw.

25 – You know how every Olympics introduces some dumb sport that’s not a sport, and sometimes played with people with ridiculous facial hair? Anyway, while at LP’s Oakland offices a decade ago a few us, including Vivek Wagle and Graham Neale, collaborated on a highly illogical “Lonely Planet sport” to pitch to the Olympics. It’s based on an expanded four-square court, a dozen “taunters” and as many referees. You’d bounce the ball into each other’s “quadrants,” though it’s possible to “refuse” the ball before it crosses the line. Thus the name: LP Refuse! It’s more fun than it looks. 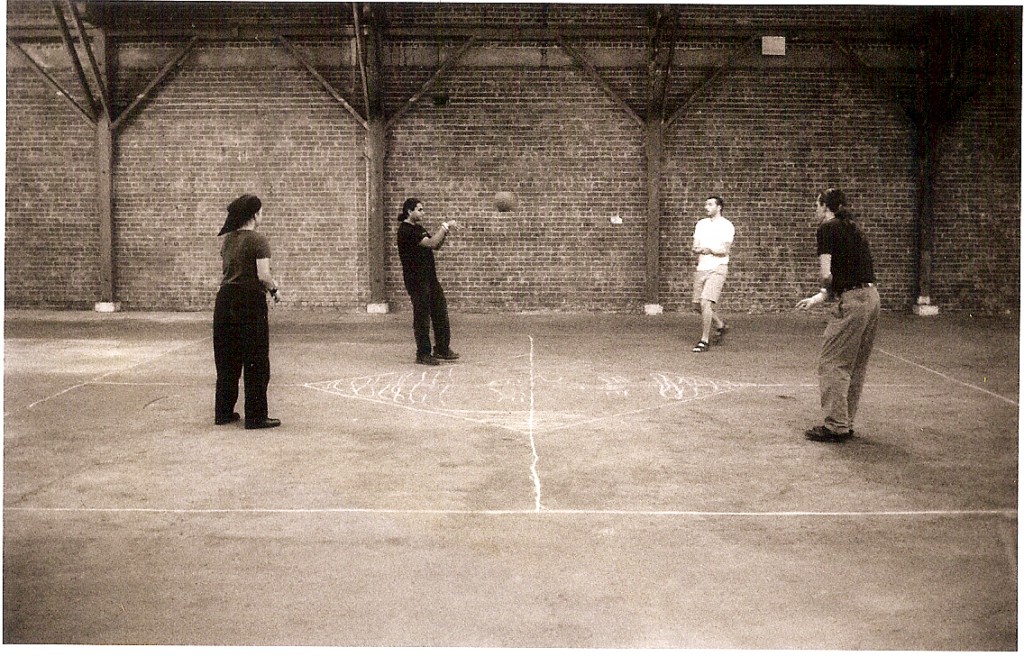 26 – Went to Cleveland! Where I saw this wonderful woman do cartwheels when she unexpectedly scored tickets to the 27th Annual Rock’n’Roll Hall of Fame Induction  Ceremony. I hope she gets more for the 28th.

27 – When you update guidebooks you really see some of the strangest things. And they usually seem to involve drunk Russian men. For example, the thuggish guys in leather jackets who disappeared with the roaming prostitute on the BAM train from Komsomolsk to Sovetskaya Gavan — and later sweetly protected me from her bleached-blonde-permed advances. (I was terrified. I felt like I was in a Warrant video.) And also this Nakhodka drunk guy with sliced off finger tips on one hand gave me grapes, then yelled at me for how tenderly I ate them. Soon after, we hitchhiked a ride back into town from a family in an SUV. You know you’re in Russia when the family is completely unfazed by a trashed grape-eater with a salty Fu Manchu and a sober foreigner hanging out on a rural road at 11am on a Wednesday. 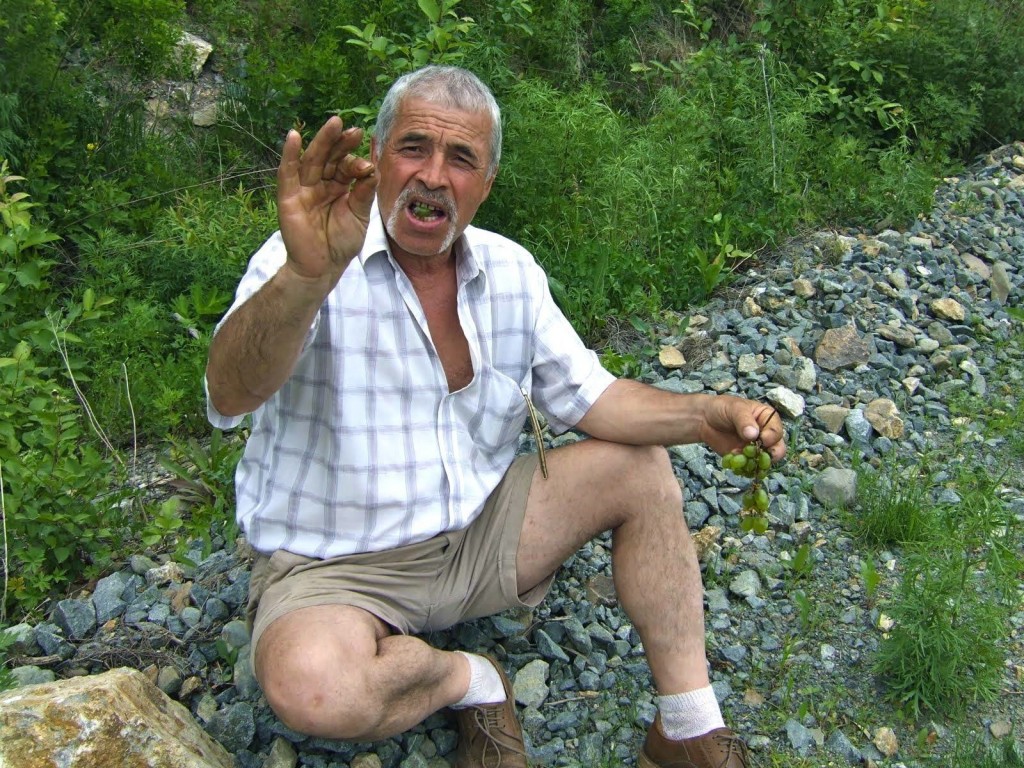 28 – Encouraged a fake Thomas Jefferson to join Twitter just after I portrayed a loyalist during a curious Philadelphia reenactment.

29 – I got to spend a night with the navy on the USS Fort McHenry on a ride from Norfolk to Baltimore. 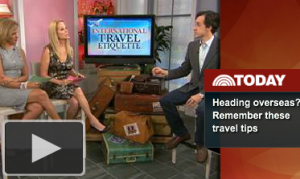 30 – Gave two bottles of Armenian brandy to the Today Show’s Hoda Kotb (lived in Norman, Oklahoma) and Kathie Lee Gifford (studied in Tulsa, Oklahoma), then afterwards in the hall smacked forehead-to-chin with Ann Curry. I hope that’s not why she left the show.

31 – Begged ESPN to let me, sort of, write about football. (And I bet you C$5 that Todd Blackledge picked this bizarre Gainesville, Florida, pizza place for his “local food” feature from my reading our Gainesville vs Baton Rouge article.)

32 – Brought the ol’ Oakland LP car pool — Michele, Wendy and John — to my home state of Oklahoma while I researched it for Lonely Planet. We survived a hail storm in the country’s only cobblestone village, saw cowboy art, and went to Boley’s unheralded, fascinating “black rodeo.” You know, the stuff you never do when you’re just a local.

34 – Took a Monopoly board to Atlantic City and visited everything on it from Baltic Ave to the Boardwalk. I even got to the Water Works. The highlight was informing an Indiana couple that the game’s “properties” were all based on Atlantic City. 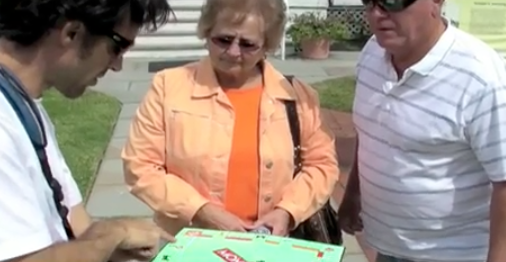 35 – Played tejo, a game of throwing lead weights at dynamite, with two Juan Carloses in a less-than-posh neighborhood of Bogotá. 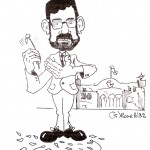 36 – Because of LP, I’m sort of a Bulgaria “expert.” I researched Bulgaria three times for LP’s Eastern Europe book and twice for articles (including one on Sofia’s Studentski Grad for the New York Times). Many fun things happened there, like turning over in bed in my dilapidated communist-era Karlovo hotel and seeing the feet of my neighbor through a hole in the wall. Also I got to buy a ’72 Moskvitch to drive up and down the Black Sea Coast and drink coffee with the ousted prime minister at Sofia’s Dunkin’ Donuts (the caricature of him, above, was a gift from a pony-tailed Dobrich artist). But the best times were around my friend Assen, who runs a couple fantastic hostels — we took roadtrips to newly discovered ruins, walks through the “gypsy” part of town (photos following), and adventures up in Bulgaria’s “Little Thorn” in the northwest, home to Belogradchik (below). 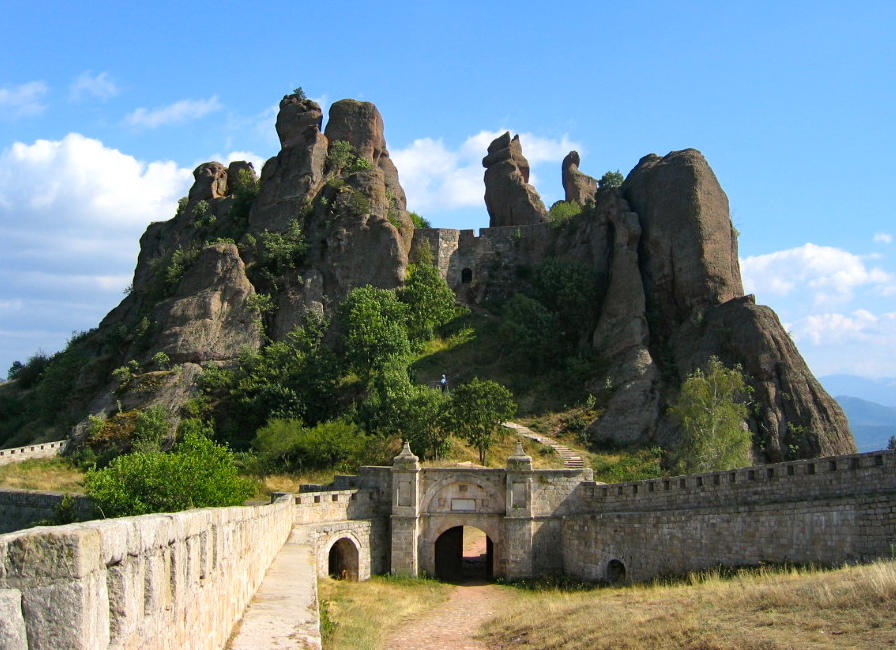 38 – Am I bad for feeling sort of delighted in helping enrage the travel media site Tnooz by posting a little article about LeBron James on the Lonely Planet homepage? That they, in apparent earnestness, claimed that “critics were astounded” by it ranked as the funniest thing I’d heard (that is until Liam Neeson’s cracked a few, unfunny AIDS jokes on Ricky Gervais’ Life’s Too Short). It’s a good thing Tnooz didn’t see my failed “Lonely Planet College Football Poll” of 2009.

39 – Shot a Rush video tour of Toronto, focusing on sites the band made “famous.” For it, I took a tour of the Moving Pictures building and even met the guy from the “Subdivisions” video (below).

Then I realized my mic was broken. That, and my heart. 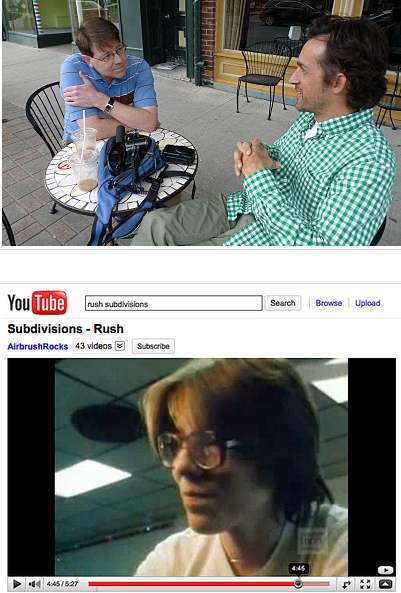 40 – Counted moustaches across Russia, made graphs to show results, and to learn.  (Though not how to spell “disappointing” apparently.) 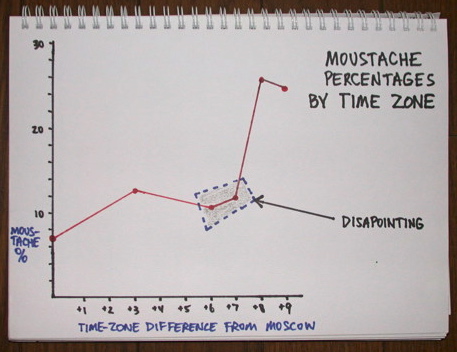 41- Got to live in Melbourne for an Australian summer (ie winter) and in London for a year-and-a-half.

42 – Visited Geronimo’s grave in Oklahoma, Sitting Bull’s in North Dakota, and the spot where Crazy Horse was killed in Nebraska. Wish I had pressed on to Little Big Horn. I’ll get there.

43 – I consider the two times I authored the Burma guidebook as the most important contribution I’ve made in my career. One of my favorite experiences was simply biking along a country path in Mrauk U and stopping. Women carrying produce from a nearby river market soon happened by and tried to get me, and a fellow Belgian traveler, to take their baskets for them as a joke. We tried, but could barely carry one, both of us, by hand. You see a lot when you stop. Learn too. 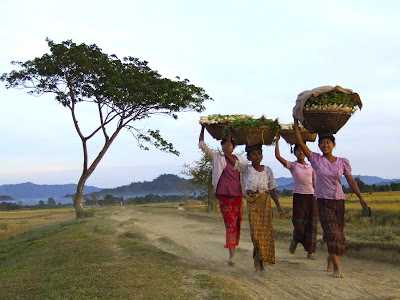 44 – Made a “Travel is Fun” t-shirt for a power conference in Melbourne. Let’s not forget that, when all’s said and done, it’s supposed to be fun. My last 15 years sure have been. 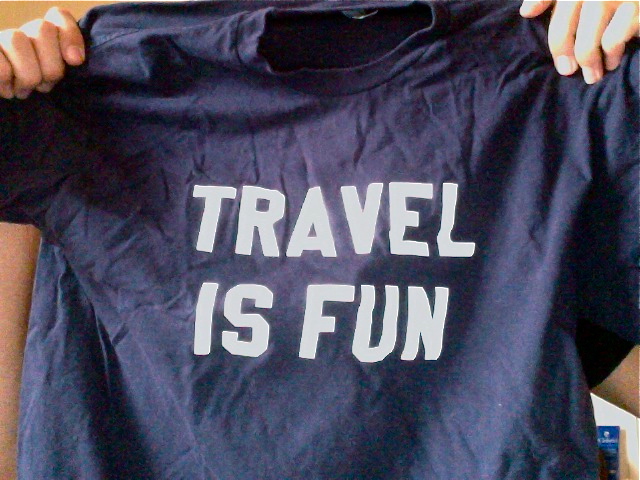 14 Responses to 44 fun things I did with Lonely Planet