Everyone’s mad about the new X-rated airport scanners. Some groups are rallying the 812 million annual air passengers in the states to opt out of the scanners on November 24, the busy day before Thanksgiving. Opting out means pat downs — which are more detailed than they used to be. Recently, one guy faces a $10,000 civil suit for saying he’d have TSA agents arrested if they touched his junk.

All of this cannot compare with the single greatest energy-wasting project of all time: taking on/off shoes at airport checks.

At 0:36 to take them on/off — per a 76-Second Travel Show sample test — this security measure equates 923 years of combined personal effort to show some sock at TSA security checks… each year. That means every year, air passengers in the US are spending more time shedding shoes than it took to build the Empire State Building (about seven million man hours, or 799 years of personal effort).

TSA rep Sharon Horowitz told me by email they’re trying to find ways to axe the shoe checks. But, she says, the scanners — 385 units in 68 airports, a cost of nearly $70 million apparently — do a better job of detecting ‘metallic and non-metallic threats,’ like stuff in shoes.

Richard Reid, are you laughing?

This video features ‘Give Peace a Chance’ by Dean Reed: one of the most remarkable cover versions of any song recorded behind the Iron Curtain. 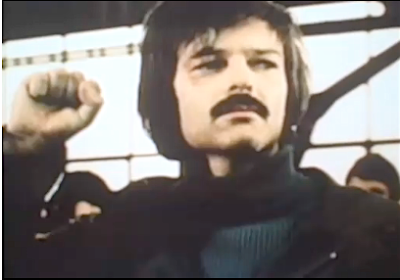