Did you see that Charlie Chaplin video yet? I like how George Clark, the director, says three times he’s screened it for ‘about 100 people,’ calls the woman in question ‘butch’ a few times, starts with blatant self promotion, and — a director — rambles on way too long and shoots his deal in bad lighting.

Considering that, AND that it’s the 25th anniversary of a more relevant time-travel (and Huey Lewis) vehicle Back to the Future, it’s time to weigh in.

Can you time travel? Is it better to go back or forward? And what when would physicist Paul Davies, with a time machine, head to?

My ranking of the Charlie Chaplin traveler, out of five possible clocks: 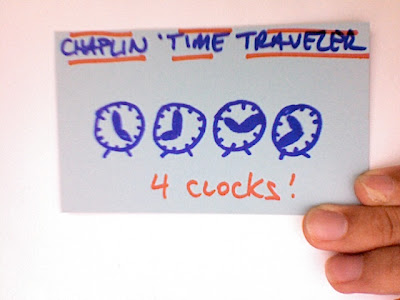