But here’s three more key things to do on Monday. 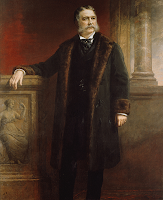 CHOP IT
Narrowly edging out Lincoln’s beard, and William Howard Taft’s peppery swoop of a ‘stache (the last pres with facial hair), Chester A Arthur had the best facial hair of any US president. In a landslide.

This year, replicate it, by picking up a chop and adding a moustache. Caufield’s sells the chops – curiously called ‘60s sideburns’ – for US$8.49.

Speaking of facial hair, from Lincoln to Taft, only two presidents of the 11 went bare-faced – and didn’t fare well. Andrew Johnson, the VP who assumed presidency after Lincoln’s assassination in 1865, was impeached; William McKinley was gunned down by a crazed Polish-Belarussian American (barefaced) anarchist.

USE YOUR LEFT HAND
Barack Obama, Bill Clinton, George HW Bush, Ronald Reagan – every president since 1980 except W – were left-handed.

RE-CREATE MILLARD FILLMORE’S DEATH
Last year was Poe’s 200th birthday and Richmond, home to one of a few competing Poe sites, recreated – curiously – his death. Wonderful. Let’s repeat it for the last Whig president, Millard Fillmore, an elected VP who became president when Zachary Taylor died in 1850. Here’s how: Spend Monday in bed, having soup and uttering, nearly breathlessly, Millard’s last words: ‘the nourishment is palatable.’ He died at 11:10pm, March 8, 1874 if you’re curious. 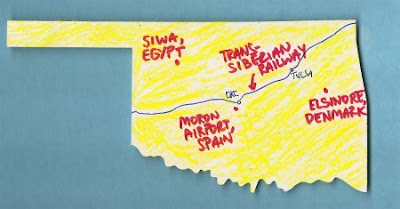 Moving on, in non-presidential news, I took a stab at making an ‘Oklahoma world map’ for my favorite Oklahoma blog yesterday. It was fun.