HOW TO LOVE LUGE
Luge. A common standby for a quick Olympic joke — along with Tanya Harding’s faulty skate. The most most of us know about the fast-moving sport is that, in the good ol’ days, the East Germans ruled it, and Dr Evil studied it in his childhood.

The Winter Olympics are back, and once again we’ll see luge in brief snippets, amidst heavy doses of well-syruped tales of non-luge athletes’ overcoming the death of an uncle or pet badger to compete in British Columbia.

But want I want to see more of is the luge. And its history. Its controversial history. 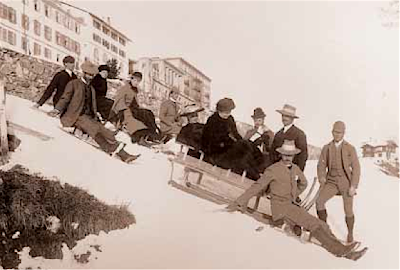 Some link ‘luge’ with a French word, others Latin — some say it evolved from “sled,” via “sledge” and “ledge.” Some say the Vikings created it. Others, mostly quoting Wikipedia, but also the Daily Mail, say Caspar Badrutt did. This enviably named Swiss hotelier of the Victorian age apparently tried to keep wealthy Brits around when the Alps snows came. The first sled tracks were down St Mortiz’s main street, and they finally built a proper track when too many horses and pedestrians were knocked off their feet by out-of-control lugers.

I contacted the Kulm Hotel, however, and learned that it wasn’t Caspar behind the madness (click on PDF at bottom), but his father, JOHANNES CASPAR BADRUTT, who incidentally was not at all pleased when little Caspar started up a rival hotel in town.

You want to luge?

Olympic tracks, either charge a bundle or have minimal access to luge tracks (bobsleds are apparently less destructive than a luge sled going 80mph). Winterberg in Germany is about 78 euro, St Moritz Tobogganning Club (which turns 125 this week) is about US$560 for five runs, Lake Placid allows a try on Christmas only, and Park City, Utah’s Wasatch Luge‘s infrequent beginner courses are already sold out for the season.

USA Luge, which makes the body-forming sleds you see at the Olympics (about $5000 a pop), tours a couple ski resorts a year to introduce luge. Next up: Patterson, New York, on February 27-28. 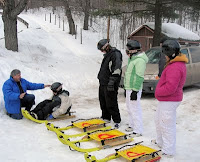 You can luge at Muskegon. But best is the natural track used by the Upper Peninsula Luge Club, which gets you a sled, some instruction and 15 or so runs a day. For $10! (Plus an annual membership fee for $25 extra.)

UPLC founder Fred Anderson (left), who helps beginners learn to luge (“that our point”), still remembers one of his first runs back in 1985. “I really got the groove coming down the track — I could just feel it, the luge, the ice, the curves.”

I’d like to feel that. And, at $10, it sounds like the best travel deal of all time. 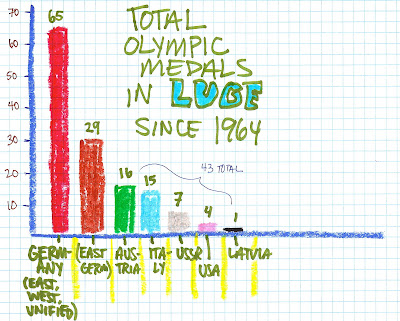