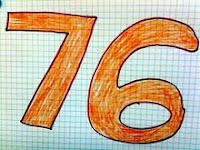 The New York Times City Room blogger J David Goodman flattered me yesterday by describing the latest 76-Second Travel Show episode as an example of how one should occasionally “treat one’s own city as a tourist might.”

I always feel that way. For the Nile Guide travel site last week, I made a similar sentiment when answering what is the most underrated destination I’ve been: “Home, particularly after a trip.” That’s when the Curiosity Radar is still on overdrive and you notice the little things (street sign fonts, subway ads, roofs) that make your home special.

Goodman went on to question why a “76-Second” show often breaks the 76-second mark (linking the 3:11 length of Tuesday’s show on Brooklyn’s Bed-Stuy it to NYC’s complaint line, or a Biblical verse — it tickled me).

We at the SSSTS picked “76,” a fairly American number, for its suggested brevity to question topics found at the borders between travel and regular life. Most people don’t have time or inclination to watch even 10-minute videos on Minsk (this 7:39 one might work for some). Though the show frequently breaks the 1:16 mark, we only promise at least 76 quality seconds per episode — whatever good comes after that mark is just gravy.