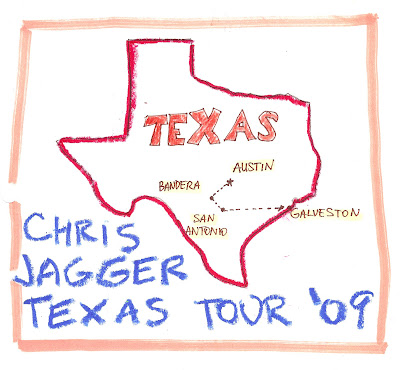 I made the claim in Tuesday’s 76-Second Travel Show that travel is kinda like Chris Jagger. That the biggest things we pick up from trips aren’t usually from a glimpse of the leaning tower of Pisa, Red Square or that big Jesus in Rio — but what we find around it. Meaning, extended conversations with rice-bag clerks, minor-league hockey games, asking to speak to curators of small, neglected museums. Or a Chris concert for 100 at the now-defunct Bottom Line in New York, rather than seeing Mick belt out ‘Satisfaction’ for the 14, 237th time from the back of Giants Stadium (I’ve done both).

Turns out I was righter than I figured: Chris Jagger is a travel writer.

Last May Chris wrote about his little romp through Texas, crossing the center of the state’s wide girth at places you might expect — the Alamo, Austin’s swimming holes, a dude ranch.

Though he loses points for his typo for Galveston’s historic Balinese Room (he calls it the ‘Bali Club’) — and he probably could have pointed out Indian Territory is today’s Oklahoma and that Abilene is in Kansas — we at SSSTS applaud the effort and award Chris 3.4 stars out of 5.0 stars on the Perfect Travel scale for picking local diners over chain restaurants (which, per Chris, ‘seek to ruin any sense of adventure’) and finishing a horse ride by picking up some Wranglers on location (I did the same in Valentine, Nebraska a few years ago — call me Chris, let’s travel).

Chris gave us a nice overview of central highlights. But I’d vote that the real Chris Jagger of Texas is more likely Big Bend National Park , rooting for TCU football, spending some time in Lubbock, or seeing the world’s greatest cheerleaders, the Kilgore Rangerettes.

These are all big-time Chris Jaggers.