Do we hug more when we travel? I mean, hug people you’ve known for 10 minutes and will never see again? I’ve had some memorable ones — by teachers on train platforms, grandparents on Polish balconies, drunk telephone line workers near a crocodile-filled pond in the Yucatan. But I’ve narrowed it down to my most memorable trio: 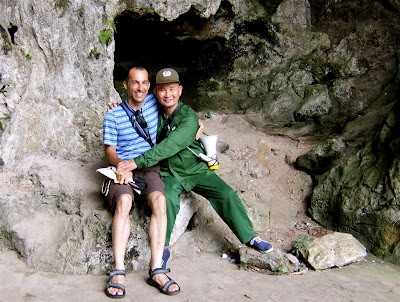 IN A VIETNAM CAVE
When I first went to Vietnam in the mid ’90s there was still real concern how locals would treat Americans. Sometimes things feel different on the road, like this full-on hug from a former North Vietnam captain in an empty cave in Cat Ba a couple years ago. Maybe he liked my zip-off-pants/shorts.

BY JFK (AIRPORT)
I always talk with taxi drivers, particularly on the road, because there’s always stories to hear, and there’s time to kill anyway. Recently my first THREE taxi drivers in Las Vegas were all women. All seemed from the same worn-out-from-Midwest club, and indeed they hailed from Ohio, Illinois and upstate New York (kinda Midwest). But the best experience was the Nigerian-American man, a very large one, who responded to my $15 tip one time with a lasting bear hug at the JFK curb.

IN A TINY TURKISH BAR
I’ve only been to Istanbul once, but the ‘time spent: likely hug’ ratio was stunning. At least for me. The biggest and most bruising hug came from a large bearded guy at a bar in an alley off Istiklal Caddesi. From the get-go, he sort of adopted me as his new buddy, splitting time with his laughing girlfriend and embracing me ways that I still don’t comprehend. My friends thought it was hilarious. The free beer was a nice touch though.