Twenty years ago, I was a quarter way through my first Eurail check-the-country-off-the-list trip across Europe — London to Rome in 20 days. I don’t regret it, but sometimes I think twice about how I spent that July 14 — the 200th anniversary of Paris’ Bastille Day. I was time-killing a day a few hours north in Bruges, leisurely walking by canals, sitting in quaint parks, getting ice cream in waffle cones from heart-melting blondes with long eyelashes and no apparent knee-jerk distaste for Americans, then boarding a train for Amsterdam, shrugging off Paris for future trips.

A regret? Or just plain dumb?*

1. Not accepting the invitation from the Hungarian film crew to camp at a gulag eight hours north of Magadan, Russia.
2. Living a year-and-a-half in London and taking all my trips (on budget airlines) to Germany and Italy, never seeing things like my namesake’s birthplace, Scotland. 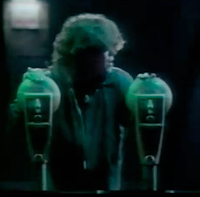 3. In 1989, skipping Berlin. ‘Two cities in one? Big deal.’ A few months later the wall came tumbling down like a John Cougar Mellencamp song.**
4. After James Brown died, there was a huge celebration of JB’s life outside the Apollo Theater in Harlem, a 30-minute subway ride away. I watched it on TV.
5. Worn out in Bulgaria, I spent the airline’s $200 change fee to fly back one day early. Really?
6. I trusted the ‘where you from?’ from a grisly guy with a huge fake smile in a Guadalajara bus station. While I answered cheerfully, his pal took a backpack from under my feet behind me. They didn’t get much: just my camera, $200 and my passport.
7. Putting my passport in a backpack in Guadalajara.
8. Five years of living in San Francisco = not once going onto the bay. Not Alcatraz, not a ferry to Sausalito, where Chevy Chase lived in the immortal film Foul Play.***

9. On a study trip to Russia in 1992, yelling at the lady tour guide on a night St Petersburg bus tour to ‘put the Stones tape in’ after my unsuccessful debut with vodka. (I was successful getting the Stones tape in though.) Sorry Natasha!
10. Speaking of St Petersburg, I spent six weeks there. Time spent in the Hermitage? About 45 minutes.
11. In other museum underachievements, after 11 years or so living in New York City, total time in the Met? About 80 minutes.
12. Never going to Laos.
13. Or Cuba. 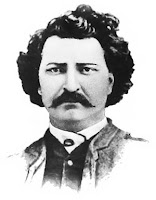 14. After driving purposely way out of my way to see Manitoba, spending only four wakeful hours in Winnipeg. (Though managing to see Louis Riel‘s grave — and eat some bad Italian food.)
15. Not getting a photo with the Detroit Red Wings staying in the same hotel in Pittsburgh (while competing for the Stanley Cup) in June 2009.
16. Not spending longer than 10 minutes at a sprawling gypsy horse fair outside Odorheiu Secuiesc, Romania.
17. Spending a week in Punjab, India, and visited the Sikh’s Golden Palace in Armitsar — a short bus ride from Lahore, but never even considering going crossing into Pakistan. May not have that chance again.
18. Not going up the CN Tower in Toronto because it IS too expensive (from C$22). (See it apparently get hit by a rebuking lightning a couple times, following.)

19. Eating one too many street barbecue beef skewers on a stick in Yangon, and spending two days vomiting.
20. Turning down the offer to stay a night on a floating house outside Chau Doc, Vietnam.
21. Driving into a thunderstorm during a tornado warning because I really didn’t want to wait another day for my first glimpse of Nebraska. Had plenty of time to mull that one over, parked under a dentist’s car park down-wind, while watching half the town pouring into a Wal Mart to huddle in sales sections away from windows.
22. Letting the film development shop in Tulsa throw away my photos from a trip to Rome after I complained (rightfully) that they didn’t do a good job.
23. Turning down an invitation to hang with Civil War re-enactors camping by a basketball court at a forgotten battle event in southeastern Iowa. (See photo at top of post of completely different re-enactment.)
24. Skipping Mesa Verde during a five-day trip to Durango, Colorado.
25. Going whale-watching on an August trip to touristy Bar Harbor, Maine. Didn’t see a minnow.
26. Going to Bar Harbor, Maine — at least in August.
27. Obeying my parents who wouldn’t let me, at age 16, to drive on a school night nine hours to Memphis with a free backstage pass for a REM show. (On the Fables tour!)
28. Not traveling more in Eastern Europe from 1989 to 1992, especially.
29. Only driving through Albuquerque. (At least AC/DC’s ‘TNT’ was on the radio.)
30. Summer 1991: Too much time in Vienna, not enough time in Czechoslovakia.
31. Having laundry done in places like Khabarovsk, Russia, where dry-cleaning-prices-plus cost more than buying new clothes.
32. Driving across Western Kansas and skipping Mt Sunflower. Children, don’t do what I’ve done! 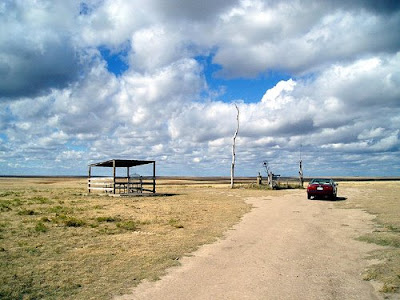 33. Russia 1991 study trip: throwing vegetables at trams from our hotel window, tossing penny soccer games out of skyscrapers. Mostly it was Pete the minor league baseball player’s fault.
34. Not keeping much of a journal while living 18 months in Ho Chi Minh City, Vietnam, in the mid ’90s.
35. Not spending the night, or more time, much much more time, in Kavarna, Bulgaria – the heavy metal capital of the world.
36. Another Bulgaria burp (there are many): Not climbing through the smashed ground-level windows of this building to see the towering commie mosaics inside: 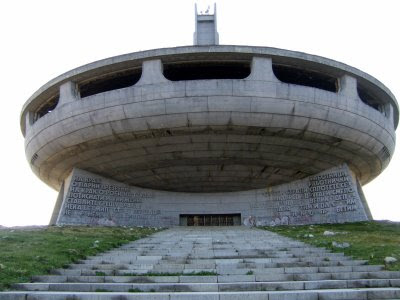 Admittedly the place, with its front steps smeared in a LOT of cow dung, freaked me out.

37. Not going to Dubrovnik, Yugoslavia, when I had a chance in 1991, a few months before the war broke out.
38. Never going to Spain or Ireland, particularly when they were cheap.
39. After my trip, only once calling the lovely Grewals, the Sikh family who hosted a week-long stay in Chandigargh, India in 1997. Then losing their contact info.
40. Leaving my passport in my $8 room in Valladolid, Mexico, having to get off the bus on the highway, hitch-hike back to retrieve it.
41. Losing my photograph with Chris Jagger — brother of Mick — who wore a Tibetan hat after a regrettably bad cajun gig. (Watching live cajun/zydeco music by unfamous British brothers of famous British rock stars is another huge regret of mine. I can’t seem to help myself.)
42. Losing my photographs of a great great day riding on the back of a local’s bike and getting an airbrushed sign made in Batambang, Cambodia.
43. Staying with a Mexico City family in 1990, I bought some fake feces at Chapultepec and played a trick on kids way too young for the humor (maybe two years old?). Lesson: Save the fake feces for pranks back home.
44. A few hours to spare in touristy Deadwood, South Dakota with my dad, talked about dressing up as 19th-century gold prospectors for a hokey photo, but not doing it. This is easily outweighed by having my only just-dad-and-me trip and hearing his unguarded ‘oh!’ at first glimpse of Mt Rushmore, less than a year before he died. But I do have a photo with him at the taco truck outside Lonely Planet‘s Oakland offices: 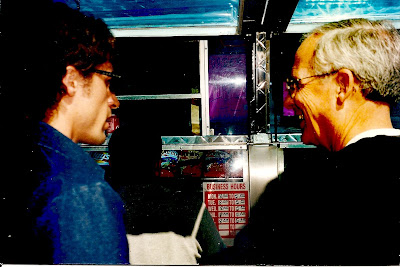 45. On a two-date ‘Indiana tour’ (both in Greencastle) while playing guitar for the ‘parted hair hardcore’ band Tall Tales in college, we couldn’t convince Mitch to call in sick and stop in at Six Flags Mid America in St Louis. Big-time regret, here.
46. Wetting my pants at my debut visit of Tulsa’s legendary Woodland Hills Mall. Not sure if it was excitement or just plain nerves. Either way, my baseball uniform? Soaked from the waist down.
47. Not sending more post cards.

–> Feel free to share your dumb moments here, or at a new Lonely Planet ‘Dumb Travel Moments’ group I just started up.

– – – – – – – – – – – – – – – –
* Actually I think skipping a huge event like that isn’t always a bad idea. Missing a walled-up Berlin is another matter.
** Please make the time to rewatch the John Cougar Mellencamp video to help me answer two key questions: At 2:32 mark is that really him sliding down tall ladder? And, at 2:48 mark, is that Mellencamper doing the moonwalk?
*** Anyone remember when Chevy Chase was funny? Vacation is to blame for the decline. It’s good, but didn’t play to his strengths. In Vacation, Chevy was clumsy and dumb. He’s at his best, particularly in Fletch, when he’s clumsy and smart. Probably his agent’s fault.