Can I Write Oklahoma? 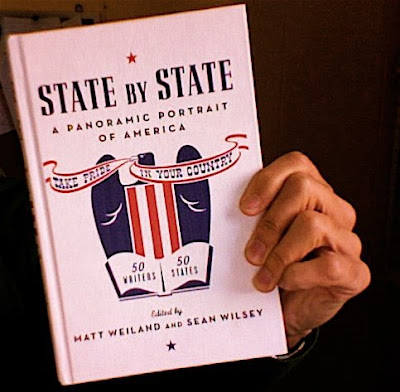 If you’ve not seen it yet, editors Matt Weiland and Sean Wilsey put together a fine new hardcover book State by State: A Panoramic Portrait of America, with essays by 50 writers of the 50 states. It’s fashioned — with its neat cover and concept — as a reprisal of the WPA Guides, a Federal Writers’ Project during FDR’s administration. Some pieces are great — Dave Eggers’ spirited case for why Illinois is the best state (because of skyscrapers, Lincoln, license plates, friendliness) is hilarious, and rather convincing.

Others are misfires. Anthony Bourdain reinforces the image of Jersey suburbia — a slave to New York City — in his ultra-personal history of New Jersey, and misses an opportunity to talk of its actual rural heart (unseen from the turnpikes). His call, I guess. Meanwhile, Said Sayrafiezadeh from New York’s Lower East Side stumbles through the most obvious South Dakota sites, akin to ‘City Slickers,’ without saying anything meaningful of a state with pink highways or touching on anything beyond the obvious. OK, maybe, in another venue, but unsatisfying for the purposes of this book.

The worst, so far (I’m not finished reading), is Oklahoma’s chapter, written by Tulsan SE Hinton, who remains Oklahoma’s turn-to writer though she’s only known for a handful of teen books written three to four decades ago.

Of course I’m an Okie, so I take it the most personally.

In her four-page entry (the briefest in the book), she explains why she still lives in Oklahoma. She quotes Will Rogers a few times, talks about how meteorologists are ‘demi gods’ there, throws an offhand note that ‘no state is prouder of its Native American heritage’. That’s fine enough, but it all comes off a bit like back-cover blurbs, designed to sell a guidebook (‘Oklahoma has all kinds of terrain…’). That she wrote it (in a day?) while being iced in her Tulsa home during the December 2007 ice storm makes it feel more like a break from her boredom. A crossword puzzle for her to pass the time.

Other writers bother to return to their homes for the story, talk with locals to give life or other perspective.

Suggestions for what SE Hinton could have talked about:

* Oklahoma has the best state shape in the country. And the reason is because Texas wanted slaves. After the Missouri Compromise forbid slavery over the 36-30 parallel, so they just sliced off the top of their panhandle.

* Oklahoma has the best state flag in the country. And the only one devoted to Native American themes.

* Rand McNally once famously forgot to include Oklahoma in a road atlas.

* John Steinbeck immortalized Dust Bowl Okies’ move west in The Grapes of Wrath, but didn’t bother to check much about the setting. He described a dusty flat plains for the Joads’ hometown, but placed it in the hilly, green east of the state.

* Oklahoma is named for the Choctaw word for ‘red man,’ has more Native Americans than any other state (per capita), is planning a huge Native American museum in downtown OKC, and the state’s nickname openly acknowledges law-breakers, the Sooners.

* That Oklahoma, like Kentucky, is a state without a clear region. It’s sort of Great Plains (but with a FAR more diverse population than any state north of it), too western to be Midwest ultimately, and not south at all. In the end, Oklahoma is part of what I call the Texas sub-continent, linked to its rival big brother more than any of its other neighbors.

* Oklahoma’s ‘black towns’ like Boley, which hosts a ‘black rodeo’ annually — all legacies of towns settled shortly after the Civil War.

* Oklahoma is redder than any state — election-wise (all counties went McCain in 08) — yet OKC did the unthinkable by voting in a one-cent sales tax that helped improve itself more than any other American city in the past decade (eg Art Museum downtown, new library, putting water in the river, Bricktown canal, Ford Center, Flaming Lips Alley…)

State by State, can we do this one over?

One Response to Can I Write Oklahoma?