I Saw the Turtle! 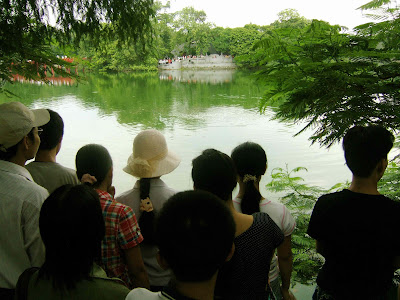 A crowd in Vietnam either means a group of parents waiting for kids leaving school, or a fight. In Hanoi, there’s a third option, if you see a crowd on the rim of Hoan Kiem Lake (Restored Sword Lake) in the center of town: someone’s seen the six-foot-long turtle that many believe doesn’t exist. 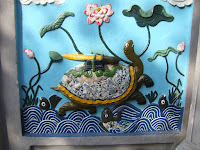 Hanoi’s famed lake is based on a 15th-century legend of a massive turtle who first gave a sword to the (actual) nobleman/warrior Le Loi to fight off the Chinese, then after doing so successfully, Le Loi went boating in the lake with the sword, and the turtle came and snatched it back — then disappeared in the murky depths never to be seen again. (When I hear of the tale, I always enjoy imagining the sound of the turtle snapping at the sword — a non-threatening, but decisive, snap, re-claiming the sword that Le Loi may or may not have wanted to return…) One of the tiny islands on the lake is ‘tortoise island’ with a slightly leaning, picturesque tower built in rememberance of it. In 1993, plans were made to drain the lake until some protested to the government — at a period when not many did; scuba divers searched for turtles and none were found. All this is fun and fine, but the catch is there really are VERY LARGE turtles in the lake. Or at least one. And if spotted, expect a large crowd will gather to look.

Walking by the lake today, I saw a huge crowd gathered on the lake’s northern end. Looking in — about the place where I saw a bloated dead rat floating amidst some garbage a couple weeks ago — huge bubbles appeared. The suddenly, a head! The head of a massive turtle. The crowd ‘oohed’ as if spotting a dragon decapitating a llama, the turtle slowly moved toward the center of the lake — occasionally showing its head again. I couldn’t believe my luck. I telephoned a pal in Hanoi, Nam, who said ‘What? I’ve never seen it in my life.’

Apparently sightings are rare. The following comes from a decade-old article that speculated that IF the turtle existed it would last much longer…

“This turtle is a fascinating phenomenon, probably the biggest soft-shell in the world and certainly the most endangered,” said Peter Pritchard, a renowned turtle biologist. “People in Vietnam are treating it like the Loch Ness monster, but this is not a myth. People need to treat it like a biological thing — an endangered species.”

But is the turtle related to the sword-biting legend, or just a passerby? Dr Ha Dinh Duc, supposedly Vietnam’s leading ‘turtle expert’, believes it IS the turtle — about 560 years old now. He said…

“Yes, that’s right, the same turtle,” said Duc, 56, a biology professor at Hanoi National University who has studied the Hoan Kiem turtles since 1991. “Some scientists don’t believe a turtle could live this long, especially in a lake so small and with so many people around, but I think so.”