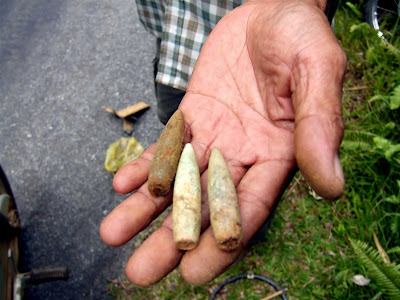 In Hue — the capital of Vietnam during the Nguyen Dynasty (1802-1945) — visitors have three principal choices for tourism: a boat tour of the king’s tombs located on and off the Perfume River inland, a looksy at the Citadel in town (largely destroyed during the French and American wars, particularly the Tet Offensive in 1968), and a tour of the ‘DMZ’ (demilitarized zone), that once separated North from South. For the latter, it practically makes no difference who you sign up with on a group tour — a travel cafe, an agency, your guesthouse, your hotel — you end up on one of two buses that engage in one of the less rewarding trips you can take Vietnam: 11 hours in all, about nine on the bus, a dissinterested guide who was three at the end of the war, and little explanation to take in sites (‘firebases,’ ‘army camps,’ filled-in bomb craters) that no longer exist. One guide said: ‘We’re passing a firebase…’ as the bus of 30 tourists zipped by, ‘But there’s nothing to see, and locals will just try to sell you things, so we’re not stopping.’ Money well spent.

I signed up for a tour reluctantly (partly to see what so many take, and because it was harder to access some sites — including the Vinh Moc Tunnels where 300 villagers lived underground — on my own), but instead I broke away for half of the tour and hired a South Vietnamese veteran to take me to a few sites not included in the tour. It doubled the price of my day trip — from $10 to $20 — but was easily four times as rewarding. 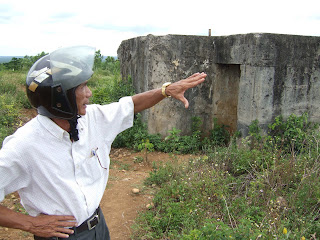 On the way to the US Cong Tien firebase (aka ‘Charlie 2’), where my 62-year-old guide Dien had once worked (and met with ‘Westy’ — General Westmoreland — many times, apparently), we stopped off in a forest of rubber trees to check out a bomb crater. It’s one thing to look at a hole, another to get some background. ‘We’re south of the DMZ now, but the VC came here every night. We’d send up flares every 30 minutes from 5.30pm to 6am so they couldn’t make movements. During the day the US bombers flew overhead to ID camouflaged enemy bases… then bomb it or drop agent orange. In 1968, this was all jungle. By the end of the year… nothing.’ The workers collecting rubber wore uniforms. Dien explained why, ‘The government runs this whole area. They’re party members, working like collective farmers.’

We finished at a North Vietnamese Cemetery, where over 1000 gravestones are grouped into areas for ‘heroes,’ ‘southern soldiers’ (meaning VC from the south), Hanoi soldiers, soldiers from Ho Chi Minh’s home province, and unknown soldiers. There I gave 25 cents to a minority kid with a deformed hand (‘from agent orange’) and shook hands with a North Vietnamese vet with one arm, visiting on a group tour from Hanoi. Mr Dien spent ‘two years, six months’ in a re-education camp. The US welcomes southern vets who spent three years in a camp, and their families, and pays to relocate them. But Dien spent six months in a hospital from an illness he sustained in camp. ‘I’ve tried and tried, but your government says no. I don’t understand.’ 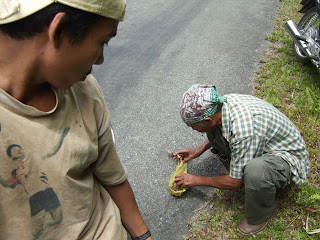 With a few hours to spare today, I took a tour up Highway 49 — an old ‘elephant trail’ and ‘tank trail’ that’s now a bumpy paved road to Laos — where the US used to send artillery to cut off the Ho Chi Minh Trail. South VN vet Mr Dung, 53 (a refreshingly unpolished but knowledgable ‘guide’), only spent a month in jail after the war. ‘I wasn’t important,’ he said. ‘I was young. I spent three years in the army. I joined at 17, illegally. I lied about my age to get in. I wanted the money,’ he laughed. Mr Dung — who wore a bandana much of the trip and carefully weaved around Laos-bound trucks going 70 km/h — is a talkative, likeable guy who stopped people on the road to talk. In Hong Tien village — about half Vietnamese, half Pa Hy people — he stopped a little 70-year-old man with gray hair and a ballcap on, and chatted as if they knew each other. Turns out, his family was born in Laos, moved to middle Laos in the ’40s, then across to Vietnam in 1976. The VN government allows that, I wondered? ‘Sure,’ Mr Dung said. ‘Laos and Vietnam are like USA and Canada — like brothers.’

Heading up forested hills that too had been leveled by agent orange during the war, he flagged down a motorcycle guy going the opposite way. Sam, about 25, lives in hut on the mountain and was balancing a self-made metal detector in front of him. Mr Dung translated, ‘He’s searching for bomb shells and bullets. Honda pays 250,000 dong (about $16) per kilogram of iron.’ I asked if he found anything today. ‘Not much,’ Mr Dung again translated. ‘Just some helicopter bullets and M-16 shells.’ Mr Sam held out a handful and offered it as a gift, then showed how his detector works. Turning it on, a 1950s war-movie radio sound came on, as he passed it over the metal, it silenced. ‘Very dangerous work.’

If you want good DMZ tours, Stop-n-Go Cafe in Hue offers alternative tours ($16 by motorcycle — but 300km in one day!; or about $50 or $60 with car). Or you bus to Dong Ha, about 50km north, and drop by DMZ Cafe, where Dien (and two other South Vietnam vets) work. Let me know if you’re interested in meeting Mr Dung in Hue.

4 Responses to Touring the DMZ with South Vietnamese Vets